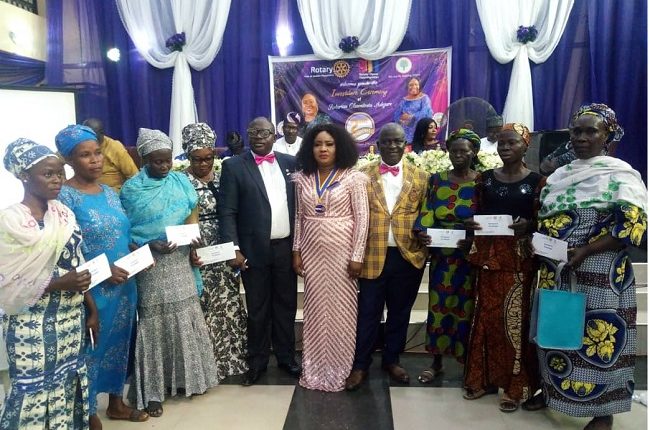 Rotary Club of Ibadan – Ologuneru has donated the sum of 10,000 to seven widows while inaugurating its second president on Sunday.

Adejare, added that she will key in to the Club’s year theme, which is to go all out and open opportunities, adding that she planned to execute projects in 7 avenues of service provided by the club.

While she added that Rotary prepare challenge of leadership among members, adding that the club is all about having positive impact on the society.

As part of its bid to give support to the community , during the investiture ceremony , the newly inaugurated president, gives support to 7 selected widows in the Ologuneru environs to support them in their Petty trades.

According to the president, the widows were assisted with the cash gifts to serve as succour to the widows.

One of the beneficiaries, Mrs Mojisola Salaudeen, appreciates the club for considering her for the gesture , she added that the cash gift will go along way in helping in her Petty trade.

While she added that the club has done a great work by giving support to widows one of the vulnerable in the society.

Speaking at the event , guest speaker, Adetona Owonikoko, speaking on the topic Rotary Club and community development “Making impacts and creating opportunities”, noted that the club is passionate about providing sustainable solutions to poverty.

He added that the Club’s goal is to strengthen the capacity of communities, adding that Rotary also trains members to become resources for their community.

The party also said that immediately the Caretaker/Extraordinary Convention Planning Committee was put in place after the NWC’s dissolution, the crises that had characterised its affairs were laid to rest….Rotary Club of Ologuneru

The Emir of Zazzau, in Kaduna State, Alhaji Shehu Idris has died in his palace at the age of 84…Rotary Club of Ologuneru