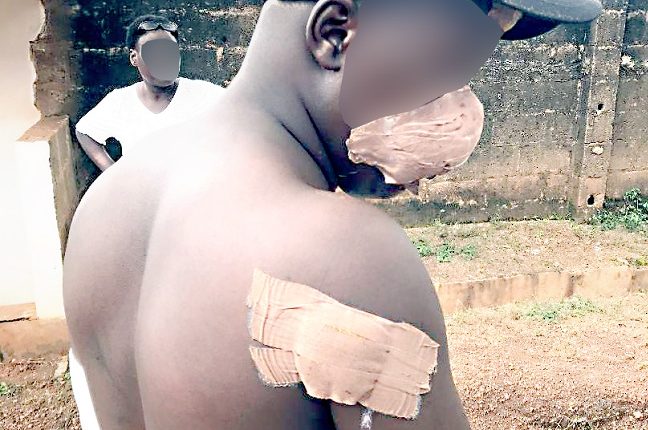 TWO robbery suspects almost killed a student of The Polytechnic, Ibadan, Tomiwa (surname withheld), at Awotan area of Ibadan, Oyo State, as he was stabbed several times in an attempt to snatch a mobile phone from him.

A nearby shop owner, who is also a widow, was however dispossessed of her Android Tecno phone at gunpoint when Tomiwa, covered in blood, ran into her house through her shop gate to seek protection.

The robbers were said to have operated on a motorbike popularly called ladies’ motorcycle, with the getaway rider in a position of quick take-off after their operation.

The victim, Tomiwa, narrating his experience to Tribune Online said: “I was coming from my brother’s house down the street and was heading towards the main road to go back to our house at Mosoke area of Apete when I saw two guys walking towards me.

“As I got to a black gate beside a shop, they got to me and split up, putting me in the middle.

“I stood still to observe what was happening. One of them bent down as if he wanted to pick something and stylishly closed the gap between us. I didn’t know they wanted to attack me.

“The other one just raised a hammer and hit me on the forehead. As I wanted to escape, he brought out a knife and snatched my phone.

“I ran inside the shop I found there. I was covered in blood as I could not see. After they left, I went to narrate the incident to my brother and he rushed me to a nearby hospital for medical treatment as I had lost so much blood. My friends who heard of it also lodged a report at the police station.”

The victim’s friend who craved anonymity said that Tomiwa was actually not the robbers’ target as, shortly before his experience, they had attacked a young man and his girlfriend on the same road and injured him, taking a phone from him.

He stated further that the guy escaped into a corner where they met Tomiwa and descended on him. He said that people saw them mounting a lady’s bike with which they sped off.

He spoke about the frequency of phone theft in the area.

The widow victim, who did not disclose her name, also spoke on what led to her being attacked.

“I was sitting in my shop with one of my neighbours when I saw the attackers stabbing the victim.

“As we heard the boy’s agonising cry and tried to see what was happening, my neighbour saw the knife and ran back. In fear, I wanted to shut the gate to my shop but the boy being attacked was also looking for a means of escape.”

“He ran inside my shop which leads to our apartment and they pounced on me, pointing a gun at my cheek and asking me to hand over my android Tecno phone, which I did promptly. They left immediately.”

She pointed at two places nearby where the criminals also snatched phones from passersby, adding that a nearby barber also suffered the same fate.

She said that she also heard that they pursued two young residents and attacked them, injuring the male to take his phones.

He was also said to have been rushed to the same private hospital where Tomiwa was treated.

The woman also recounted how a young boy who came to purchase recharge card in her shop was blocked by robbers at the gate next to her shop.

They pulled out knife, cutlass and gun in a threat and snatched his phone off his hand,” she told  Tribune Online.

Some residents who were at the scene appealed to the state government and security forces to help in curbing the activities of the criminals so that lives would not be lost because of phones.

N.B. Please cover his two eyes so that he would be protected. He allowed me to take his pictures. This lends credence to the story but there is need to protect the victim.