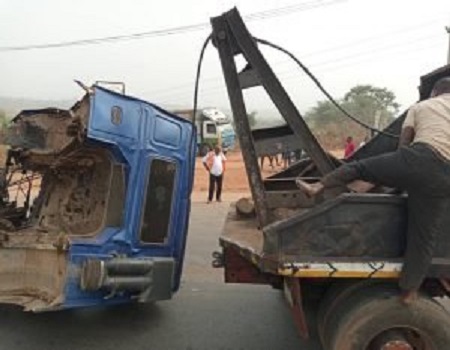 According to an eye witness who gave his name as Mr Joseph Okafor who was washing his car at the Kwata junction, Anambra State.

We were here washing our cars when the truck was running at a high speed and the conductor was shouting the break has failed and the shuttle was discharging passengers near the traffic light.

A policeman was trying to stop the truck from beating the traffic light but the truck could not stop and all that we saw was the truck climbing on top of the shuttle and crushed it to pieces.

The shuttle driver survived along with a woman carrying her baby and three others.

But one woman was trapped in between the truck and the shuttle and he was rescued by the police and Federal Road Safty men but the other woman in front of her had her head buried inside the crushed engine of the shuttle.

The woman that was disembarking from the shuttle was crushed by the truck beyond recognition and her mangled remains were packed into a Ghana Must Go bag.

Speaking with reporters at the scene of the accident the Sector Commander of the Road Safty Corps Mr Andrew Kumapayi confirmed that two women died in and four others survived and that they are responding to treatment at the hospital.

He explained that the cause of the accident was over speeding by the truck driver who wanted to beat the traffic light and rammed into the shuttle bus in the process.

Also speaking the Anambra state Commissioners for Transport Dr Christan Madubuko told reporters that the essence of the traffic light is to control the over speeding by motorists adding that had it been that the truck driver obeyed the traffic light the accident would not have occurred.

It is not clear as at the time of this report the were about of the truck driver while on of the survivors was seen breastfeeding her less than a one-year-old baby as the ambulance rushed them to the hospital.

Also, a hit and run bus whose details was still sketchy, killed one person at mgbuka 2nd gate, Onitsha-Owerri expressway on friday.

The FRSC sector commandant, Mr Andrew Kumapayi, who confirmed the incident in a statement to newsmen, said the crash which was caused by over speeding, occurred at about 9.45 am.

He said the deceased has been deposited at Gateway Mortuary, Oba.

46 dead, 387 injured in accidents on Abeokuta-Lagos expressway in 6 years ― FRSC