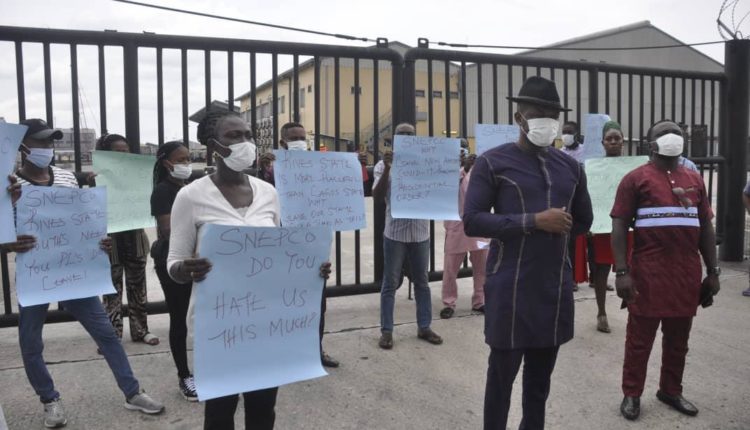 Youths under the aegis of the Rivers Youth State Federation (RSYF) on Friday staged a protest at the logistics base of Shell Nigeria Exploration and Production Company (SNEPCO) over an alleged plan by the company to relocate its business to Lagos.

In September 2018, a similar protest was staged by RSYF and the Onne Youth Council (OYC).

President of Rivers Youth State Federation (RSYF), Saviour Patrick, who led the protest, said the fresh move by SNEPCO to move out of Rivers State will lead to significant job losses in the state and render many members of his group idle.

It was observed that the protesting youths observed strict social distancing and wore nose masks during the protest.

A letter delivered to the company by the youths during the protest, and signed by Patrick and RSYF Secretary=General, Bishop Abhili Tam, reads: “Our attention has been drawn to your recent plans of relocating to Lagos State of Nigeria from Onne Port in spite COVID-19 lockdown without informing your host community in a clear term as to your reason.

“It is worthy of note that in September 2018, your company launched the same bid which we vehemently protested in our great numbers and which took the intervention of the Director of DSS Rivers State Command and Ateke Michael Tom to avert. This development therefore is worrisome.

“We wish to refresh your memory that after the intervention by the two aforementioned authorities, certain resolutions were made at the Conference Hall of the DSS Rivers State Command in the presence of your company representatives, DSS Director, NPA representatives, Oil and Gas Free Zones Authority (OGFZA) representatives and other, we suspended our protest.

“We now wonder why you are intentionally violating all the resolutions made during that meeting and shortly after the protest was halted.
“We therefore, in strong terms, condemn the inhuman and inconsiderate move by SNEPCO to leave Onne Port, Rivers State at this critical time when we are all working to combat a common enemy of human existence.

“We wish to appeal that you reverse your decision of leaving the shores of Rivers State as such attempt will be protested by Rivers youths and you shall be held responsible if there be any breakdown of law and order, which may be the resultant effect of your planned relocation to Lagos State.”

The protesting youths, who claimed that as much as 5,000 direct and indirect jobs could be lost in Rivers State to the planned relocation, carried various placards at the SNEPCO logistics base located within the Onne Port at the Onne Oil and Gas Free Zone.

The protesters also appealed to President Muhammadu Buhari and Rivers State governor, Nyesom Wike, to prevail on SNEPCO to stop the planned relocation.

Britain Injects Two Persons As COVID-19 Vaccine Trial Begins
The first human trial in Europe of a coronavirus vaccine has begun in Oxford, Britain. Two volunteers were injected, the first of more than 800 people recruited for the study… Read full story

COVID-19: South-West Governors Shift Enforcement Date For Use Of Face Mask ToMay 1
Ondo State government on Thursday said governors of the South-West states had extended the deadline for the compulsory use of face masks by one week… Read full story

MSSN at 66: A retrospect