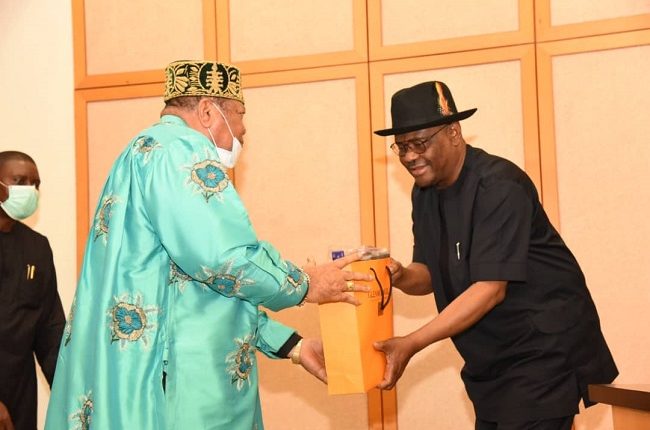 The Rivers State Government has restated its commitment to complete the Ogoni-Opobo-Andoni Unity road project within the lifespan of this administration.

The State Governor, Nyesom Wike, reaffirmed his commitment to the project when the Amayanabo of Opobo Kingdom, King Dandeson Douglas Jaja led a delegation of Chiefs, Elders and Women Leaders on a courtesy visit to Government House, Port Harcourt.

The visit was to inform the governor and also invite him to be their special guest of honour at the planned Opobo Kingdom 150 years anniversary celebration that will hold between December 24 and 28, 2020.

The Governor said the unity road project is important to his administration, which is why it must be completed and also to fulfil the promise he made to the Amayanabo that his people would drive home by road this December.

“The road to Opobo Town must be completed. It is a project that is key. I take it personal because I can’t be governor and it is not done.

“I had promised to make it possible for Opobo people to travel home by road this December. I will do everything humanly possible to fulfil that promise,” he said.

The Unity Road project was conceptualised to enable the predominantly Andoni-Opobo communities largely riverine to be able to travel by road to their communities.

Governor Wike also directed the state Surveyor General to commence surveying and measuring of the land in Opobo kingdom that was recently reclaimed by the State Government so that the land can be allocated to the benefitting families.

Wike expressed regrets that Nigeria hardly rewards hard work and people who have contributed so much to further its growth, noting the landmark achievements of Prof. Sylvanus Cookey when he was the Vice Chancellor of the University of Port Harcourt.

According to the governor, Opobo people must continue to protect their rich history and not do anything to undermine it assuring them of government’s support towards the success of the activities to celebrate the 150 years of the establishment of Opobo Kingdom.

The Governor who noted that the Amayanabo of Opobo Kingdom and his people have been very supportive of his administration and conducted themselves peacefully urged them to continue in their support and be assured that they will not be disappointed.

Earlier, in his presentation, the Amayanabo of Opobo kingdom, King Dandeson Douglas Jaja noted that the recent victory of the state government at the Supreme Court over the disputed Suku Oil Well on the Bayelsa-Rivers States’ boundary is another feat for Governor Wike saying that it has added to other giant development strides that have been driven to change life and landscape of the state.

King Jaja who is also the Chairman of Rivers State Traditional Rulers Council said Opobo Kingdom and the people have lined up several activities to celebrate Opobo Kingdom as they mark 150 years of its establishment.

He told Governor Wike that the people have invited him to be their Special Guest of Honour on the 28th December 2020 when there shall be a symbolic display of the landing of King Jaja of Opobo on the shore of a new kingdom.