Real EstateProperty and Environment
By DAYO AYEYEMI On Dec 8, 2020 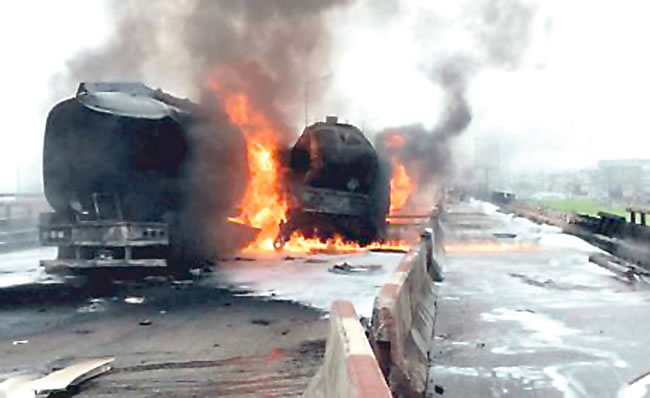 Lagos-Ibadan expressway is a hub for many residential estates, industries and places of worship, but  the frequent  tanker accidents on the route coupled with associated carnage and prolonged gridlock are giving residents and other stakeholders serious headache. DAYO AYEYEMI reports.

RISE in truck/tanker accidents on the ongoing Lagos-Ibadan road’s reconstruction project is gradually snuffing life out of road users, comprising residents, motorists and company workers, who most of the time, spend their day in prolonged gridlock caused by breakdown on the route.

For most of the time, no one can actually predict the time it will take to travel along the route, except through the help of Google map, as the entire expressway may be locked up by fuel tankers’ fire, leading to loss of lives and properties.

The latest worry by stakeholders is stemming from the fact that the 127.6 kilometre highway, starting from Ojota-Lagos to the end of toll gate in Ibadan, which reconstruction is meant to restore to its original state when it was newly constructed in 1978, has become death a trap for residents.

The reconstruction of the expressway was flagged-off in November 2018 by President Mohammadu Buhari. The contractors are Messrs Julius Berger (JB) Plc and Reynoids Construction Company Limited (RCC).

In the last one week, two cases of tanker accidents occurred, which later went up in flames on Magboro and Kara bridge sections of the road respectively, leading to total lock-down of the expressway.

These incidents happened in less than one month that 29 vehicles were razed in a multiple accident on the Long Bridge area of the expressway.

The inferno happened at about midnight when a tanker lost control, fell and exploded in the middle of the road after the Long Bridge where there was a car park and sale depot.

Nigerian Tribune gathered that more than fifteen incidents involving tanker drivers had occurred on the major expressway this year alone.

Findings also show that apart from casualties and burnt vehicles, different portions of the highway and bridges where repair works had been carried out have also been damaged by inferno caused by truck accidents.

Stakeholders are of the opinion that incessant tanker accidents on the route, if not checked, may cut short the infrastructure’s lifespan.

They want government to put in place measures to check reckless driving by tanker drivers and to also prevent rickety trucks from plying the expressway.

According to Mr Olusola Aladenika, a resident in Mowe, the rate at which truck and tanker accidents occurred between Ibafo and Mowe along the expressway was alarming.

He noted that hardly would any week gone by without a truck breakdown or involving in accident on the expressway.

Another resident in Ibafo, Paul Odusanya, said that recklessness of tanker drivers was responsible for prolonged traffic jam and people’s suffering on the route.

He narrated how he spent a whole night on the Long Bridge in February 2020 owing to petrol tanker’s explosion.

A motorist, who did not want his name in print, said he lost his Toyota Camry car in a tanker explosion on Otedola Bridge in 2018.

Worried by various abuses on the highway, the Federal Government two weeks ago had warned on truck drivers not to scuttle the delivery of the road’s reconstruction.

According to the Minister of Works and Housing, Mr Babatunde Fashola, the warning became imperative following complaints by the road contractors on the manner at which truck drivers drove and parked indiscriminately on the completed shoulders of the road, thereby destroying them.

Appealing to the truck drivers, Fashola urged truck owners to come together and build parking lot for their truck fleet.

He appealed to them to move their trucks away from the highway, assuring that government would help to fix the existing trailer park in Ogere temporarily, which the truck drivers alleged was in terrible state.

The minister said “Trailers’ operation is a business. If you want to own a fleet, you must build park. Parking indiscriminately and pouring diesel and changing petroleum on the road will damage the expressway. It is an abuse of the road. If oil is dropped on the asphalt, it will be damaged.”

The contractors had earlier made their challenges known to the minister  during a stakeholders’ meeting at Ogere, Ogun State, in the presence of official from the Nigerian Soveriegn Investment Authority (NSIA), Uche Orji, Governor Dapo Abiodun, Obas,  community leaders, truck drivers, Federal Controllers of Works in Lagos and Ogun, Mr Kayode Popoola, Umar Bakare and official of the Federal Road Safety Corps.

The contractors alleged that most truck drivers, who parked indiscriminately and in multiple lanes occupied more than one shoulder of the road, thereby slowing down construction works.

Besides, they alleged that the truck drivers also leaked engine oil and petro on the expressway. The practice, they said had contributed to the damage of sections of the road already finished.

In recent interview, Alhaji Abdullah Inuwa Mohammed of the National Association of Road Transport Owners (NARTO), said the association had, on many occasions enlightened tanker drivers on road safety culture.

He added that members with old trucks also had depots with which safety measures about driving are being taught.

Mohammed attributed indiscriminate parking by commercial buses on the expressway as one of the factors responsible for tanker’s accident.

He called for holistic solutions towards reducing tanker accidents on highways.

Ogere Branch Secretary, NURTW, Tijani Ahmed, mentioned that truck drivers major challenge on the expressway was inadequate parking space,  adding that private parks along the axis were not well maintained.

The Lagos-Ibadan highway has become notorious for tanker explosions in recent times without any significant effort to prevent a reoccurrence by the authorities.

On November 7, a similar explosion had occurred on the highway at Kara Bridge killing two persons with about 20 vehicles consumed in the inferno. A car dealer, Mr Adekunle Adeyemo, who had operated for more than eight years along the corridor, lost 14 cars to the November incident.

According to statistics from the Federal Road Safety Commission (FRCN), Nigeria lost $9.8 billion to tanker accidents in 2018.

However, it was stated that there was slight improvement in the truck accidents recorded in 2018 when compared to 2017 and 2016.

In 2019, the report said that 199 accidents were recorded with economic value worth N9.6billion invoking cost of other vehicles.

On June 21, 2020, there were a multiple accidents involving three tankers, leading to fire incidence on Kara Bridge. Two people died during the incident.

In May 21, 2020, a tanker loaded with petroleum rammed into a bus and a car on Otedola Bridge, killing one person, with several others injured.

Also in January 8, 2019, a petrol tanker spilled content on the expressway causing accidents.

In June 27, 2018, an explosion of a petroleum filled tanker engulfed other vehicles after Otedola Bridge on Lagos-Ibadan Expressway, killing 12 people, while 54 vehicles were burnt, apart from damaging the road asphalt pavement.

Lagos sector commander of FRSC, Hyginous Omeje, said there had been several crashes involving tankers on the route.

Director of Federal Highway Services  Funsho Adebiyi, had  recently warned truck drivers  not to scuttle speedy  execution of the Lagos-Ibadan expressway  project  by their attitude.

Speaking with stakeholders comprising members of National Association of Road Transport Workers (NARTW) and National Association of Road Transport Owners at the Reynod Construction Company (RCC) yard after Ogere on the Shagamu -Ibadan end of the road, Adebiyi expressed sadness over two government engineers working on Oyo -Ogbomosho road, who were knocked down by truck drivers recently.

‘How agro-commodities market is creating alternative investment opportunities for Nigerians’

House of Reps, PDP bicker over calls for Buhari’s impeachment