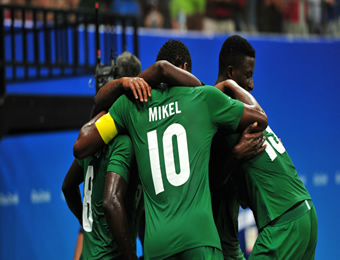 It was an impressive performance during the first outing of Nigeria’s U23 football team at the 2016 Rio Olympics, as they defeated the Japanese team to 5-4 to earn their first three points in Manaus, on Friday

Despite arriving late for their opening game of the Olympic Games, playing competitive soccer only six hours after arriving Brazil from Atlanta, Nigeria outscored Japan 5-4 in Manaus, courtesy of four goals from Oghenekaro Etebo.

The Nigerians, according to goal.com, were a late show for the tournament after flight delays meant that Samson Siasia and his team arrived in Amazonia less than seven hours to their first game at the Olympics, 20 years after they struck gold in Atlanta.

A mix-up at the airport forced Nigeria to make a late flight from Atlanta to Brazil. The team arrived in the jungle city of Manaus about six hours before overcoming jet leg and the heat and humidity in the Amazon city to win a thrilling game.

The team’s spokesman posted a picture on Twitter of the team boarding the plane with the message “here we go” and later displayed images of members going through immigration and collecting luggage.

The team faced the uncomfortable situation of spending the day of its debut at the Olympics aboard an airplane on a more than six-hour flight and facing a Japan team that was in Brazil for several days preparing for the contest.

Despite this, they did not look harried, goal.com report said, as they dispatched Asian U23 champions Japan in a game of nine goals that saw some naive defending early on as the first half ended with five strikes.

Attacker Sadiq Umar, who had a very good game, put the Nigerians in the lead early in the sixth minute when he pounced on a rebound after goalkeeper Masatoshi Kushibiki had blocked a shot from Imoh Ezekiel.

Moments after the restart, Japan won a penalty when Stanley Amuzie’s tackle on Takumi Minamino inside the Nigeria box was deemed too strong.

Shinzo Koroki stepped up to take the spot kick and he slotted the ball past Emmanuel Daniel who dived the wrong way to make it 1-1.

Nigeria would also score immediately after the restart when an Abdulahi Shehu cross found Etebo inside the box, the midfielder escaped his marker to score for his first of the game.

Just as the game got back underway, Japan equalized via Minamino who was set off on a good run by Ryota Oshima who found the Nigeria back line wide open.

Proceedings then eased up as both sides found their defensive discipline with the frenetic pace of the game.

However, Nigeria would find another opportunity to score late in the first half as Etebo pounced on his own rebound to head into the Japan goal after Umar’s brilliant work inside the box created all manner of trouble for the defenders.

Five minutes into the second half, Umar once again showed his dexterity as he won a penalty after his heel was clipped by a Japanese defender.

It was that man Etebo who stepped up to take the responsibility and he wasted no effort in slotting past Kushibiki for his hat trick.

Japan coach Makoto Teguramori made quick change and brought on star forward Takuma Asano for Riki Harakawa. This was an inspired move that rejuvenated the Samurai Blues attack as they chased the equalizer.

However, it was Nigeria who extended their lead minutes later with Etebo notching his fourth of the game from 30 yards after Kushibiki’s clearance left his goal line empty.

Asano ensured that Japan would remain in the game with a 70th minute side-heel inside the box off a pass from Hiroki Fujiharu.

The Samurai Blues continued to chase the game and substitute Musashi Suzuki scored late in added on time to make it 5-4.

However, it was to be a little too late as the referee brought the game to a close afterwards.

Nigeria now lead Group B with three points after Sweden and Colombia played out a 2-2 draw earlier in the day.

They will hope to get some needed rest before facing Sweden in their next game in Manaus on Sunday.

Dokpesi, others lose out as PDP zones chairmanship position to South-West

PDP NWC: Why we won’t insist on zoning -Makarfi