Real EstateProperty and Environment
By DAYO AYEYEMI On Oct 20, 2020 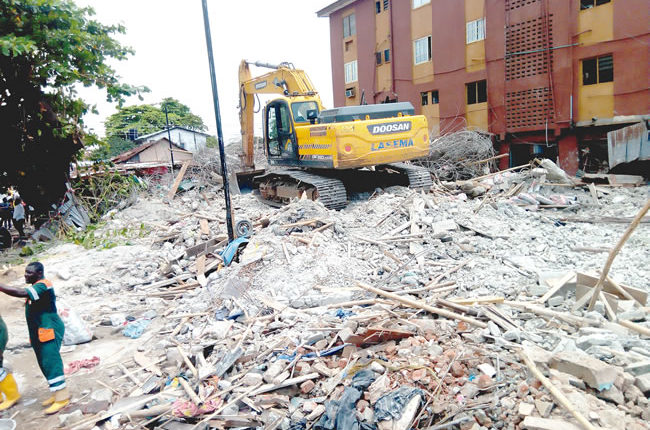 Professionals in the real estate sector have continued to express sadness over the incessant cases of building collapse in Nigeria, suggesting to government and other stakeholders ways to eradicate the problem. DAYO AYEYEMI reports.

It is no longer news that one of the evils plaguing the housing sector in Nigeria is the issue of building collapse.

Starting from Lagos to Abuja, Port Harcourt, Owerri Onitsha, Ibadan, Abakaliki and Jos, among others, all these cities have had their fair share of building collapse with attendant loss of lives.

Between January and October, 2020, more than eight incidents of building collapse have been recorded across Nigeria, with Lagos taking the lead.

The latest was the three-storey building that caved in at 60, Odo Street, Obalende, Lagos two Sundays ago, killing seven persons while injuring others.

The incident, according to eyewitnesses, occurred around 4.20 pm on that fateful day during the concrete casting of the third floor and when some Muslim youths were observing their prayer on the ground floor of the building.

Since the incident, and like previous occurrences, built environment professionals have not stopped to express sadness over frequent building collapse›s incident in Nigerian cities, which they said have become a national embarrassment.

The irony is that as they are trying to absolve themselves from involving in any building collapse, government officials in charge of building approval and control are also claiming not to be culpable.

Like the Obalende›s building collapse, officials of the Lagos State Building Control Authority (LABCA), claimed the building had been sealed since May 2020 for lack of approval, not knowing that its developer, who an eyewitness said also died in the building collapse, defied the order and continued with the construction.

From the scene, Nigerian Tribune gathered that poor procurement processes, poor foundation, use of substandard building materials and non engagement of professionals were responsible for the building collapse.

Findings also revealed that the Lagos State Government had not granted any building permit in Obalende for the past 10 years due to expiration of leases of the entire neibourghoods.

Reports have it  that investigations conducted on many collapsed building sites  in Nigeria also  revealed that inappropriate management of building production on site was a  major cause. The findings showed that quacks, which lacked professional competence usually succeeded in superintending over the very technical and complex process of building production.

Other factors include faulty foundation, use of substandard building materials, lack of effective control mechanism by government, poor implementation of government’s policy, non engagement of professionals and shoddy jobs, among others.

President of the Nigerian Institute of Building (NIOB) Mr Kunle Awobodu, said the increasing number of the unfortunate but preventable cases of building collapse has put the nation and the professionals within the sector in bad light

To curb the incessant collapse of building which usually arises from construction errors, he enjoined building control agencies across the nation to ensure that registered builder that could be held accountable for quality production is on construction site.

“Whenever such an individual is charged and found derelict in his or her duty, the regulatory body, Council of Registered Builders of Nigeria (CORBON) will withdraw the person’s practising license. The fear of losing such a license and the accompanying loss of reputation always make the builder to be very cautious.”

Former President of NIOB, Mr Chucks Omeife, blamed government’s acclaimed reform concerning physical planning law  for unending building collapse in Lagos, saying it was cosmetic in content and «that is why it has failed to stop incidences of building collapse.»

According to him,  building  collapse in Nigeria is  not an accident, but as a result of cosmetic reform and policy manipulation with the intention of making some professions more relevant than the other despite a clear cut professional roles and responsibilities.

He emphasised that professionals must be allowed to play their statutory roles, adding that it is only then the issue of building collapse could be managed if not totally eliminated.

“Until the law captures in clear terms the professional who manages the physical execution of building works and allows them to carry out their role, buildings will continue to collapse.

«Until the building control agency and the town planning regulatory authority make mandatory the engagement of builders for all building projects and request for their letter of management of any building projects, buildings will continue to collapse.

Commenting on building Collapse and Prevention Guild (BCPG) former President of the Nigerian Institution of Structural Engineers, Mr Oreoluwa Fadayomi, said the issue of collapsed buildings would remain a recurring decimal as government lacks the political will to listen to and work with the professionals outside of government.

As for the Lagos State Building Control Agency (LASBCA), he pointed out that it lacked the capacity to function effectively, suggesting that the agency needed external help.

“These were part of the recommendations by our committee set up by former Governor Ambode after the Synagogue building collapse. Moreover, Association of Consulting Engineering in Nigeria (ACEN) has a paper on the private sector colaboration with government written over 10 years ago. I believe that is resting in peace. NIStrutE has made similar proposals in the past and there is hardly any paper on causes of building collapse that did not suggest increased level of monitoring through outsourcing.»

«Government knows what to do but lacks the will.  Innocent citizens are bearing the brunt now; we pray that a major government building does not collapse on senior officials before they awake from this deep sleep. Or, are they waiting for the «End SARS» treatment.

No! They should dust their archives and act now,» the renowned engineer said

Others urged professionals to put heads together and assist their colleagues in the public sector to salvage the battered image of building and civil engineering development in Nigeria.

«Let us jointly assist of colleagues in the public sector to minimise incessant collapse of buildings,» they said.

Recent report revealed that 29 people died while 76 sustained injuries from 13 building collapse incidents across the country between February and May, 2019.

The report further stated that the state with the highest frequency of building collapse in the country in the first half of 2019 was Lagos. This was followed by Abia, Anambra and Oyo.

Four months to end 2019, Lagos witnessed four incidences of building collapse and a total of 21 deaths.

In terms of injury,, the report said that the incidents that happened in the state accounted for 47 or 61.8 per cent of the total injuries (76).