#RevolutionNow: My hair was shaved with knife, broken bottle by security operatives ― Victim 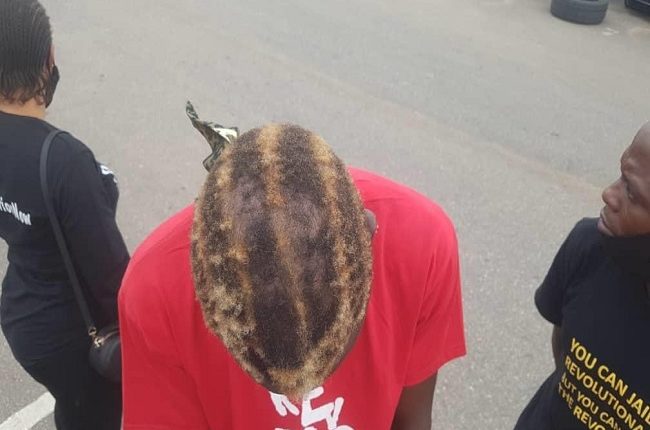 Hair of one of the protesters at Wednesday’s #RevolutionNow protest was shaved off with a knife and broken bottle by security personnel yet to be identified during the protest in Abuja.

It will be recalled that a combined team of security personnel was deployed to disperse members of #RevolutionNow movement who were gathered at Unity Fountain, Maitama, to demand good governance from President Muhammadu Buhari-led Federal Government.

The victim (name withheld), who, however, narrated his ordeal to journalists, said the officers asked him to prostrate on the floor before one of them pulled out a knife while another used a broken bottle to cut off his dreadlocks and shave his hair.

He lamented that the security operatives harassed him for wearing “brown hair” since he was not a woman.

Another protester with bruises on his back, Damilare Adenola, said he was dehumanised and battered by the security operatives for taking part in the protest to demand better governance from the administration of President Buhari, saying he was flogged with iron, chain and kicked to the ground for no reason.

“I was beaten by more than four soldiers and policemen. They slapped me several times and kicked me with boots. They also collected my phone and did not return it to me.

“It is unfortunate that this government does not accommodate civic space. There is no freedom of speech in Nigeria again.” He bemoaned.

FG Increases Hate Speech Fine From N500,000 To N5m
THE Federal Government has announced that its newly- unveiled reviewed Nigeria Broadcasting Code has provisions to increase the hate speech fine for people found culpable of hate speech from N500,000 to N5 million. This is as it said the amendment of the broadcasting code is boosting local content, among other provisions…My hair was shaved with knife

Another Alleged N6.2bn Palliative Fraud Hits NDDC •Official Petitions Senate, Demands Dissolution Of IMC
FEW weeks after the nation was treated to mindboggling revelations of misappropriation of N1.5 billion by the Interim Management Committee (IMC) of the Niger Delta Development Commission (NDDC), the Federal Government intervention agency is in the news again over alleged embezzlement of N6.2 billion approved for palliative by President Muhammadu Buhari…My hair was shaved with knife

Chinese Loans: $400m Project Abandoned After Completion
THE National Public Security Communication System project for which Nigeria took a $399.5million from China and has paid $76.83million as part of the principal as well as $84.92million interest has been abandoned, Nigerian Tribune can authoritatively report…My hair was shaved with knife

COVID-19: We have distributed over 60,000 food packs to vulnerable residents ― Fayemi