Review of The Goal 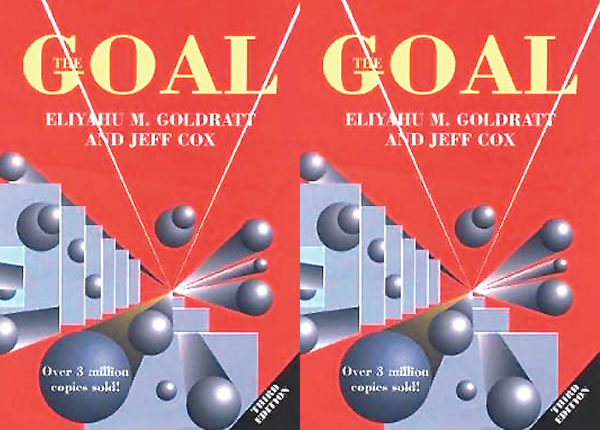 One of the standout features of The Goal, written by Eliyahu Goldratt, is that it’s written in the style of a thriller novel (complete with typical narrative tropes of conflict and resolution – the protagonist is fighting to fix his family life as well as his business!). Aside from making it very readable, this style contextualises the business theory into a real world scenario, and brings to life the daily frustrations, thoughts and feelings of the workers. Typically in a theory-based business book, you’re given tactics and approaches but left to figure out how to actually apply them day to day and there can consequently be many gaps and questions. Here, we can closely follow the story of Alex Rogo, manufacturing plant manager, as he navigates the day by day rejuvenation of his failing plant through implementing Lean manufacturing techniques and in particular the “Theory of Constraints” (which Goldratt developed).

As our protagonist Rogo struggles to see a way forward for his plant, he turns to a business consultant (and physicist) Jonah. It’s worth nothing that Goldratt himself was a scientist and philosopher, and the book brings scientific and philosophical logic and arguments in many times – particularly when thinking about balancing systems, and finding arguments to persuade teams to move forward with their leader. This consultant character is used to provide us with some explicit learning and advice, for example:

The importance of knowing your goal. Initially, management’s KPIs for the plant are based around increasing efficiencies and lowering cost per product. However, we soon realise that despite those stats painting a rosy picture, the plant isn’t making any profit. In fact, the wonderful robots that they have installed (which are very efficient) have actually harmed their ability to make money. By asking Rogo to think about the business’s ultimate goal (making money) Jonah helps him redefine the metrics that are really important to his plant (throughout, inventory and operational expense).

Using common sense over common practice. As you can see from the above example, though the metrics the business used to measure success are clearly not having the desired effect (the plant is losing money and might be closed soon), the team is extremely reluctant to change them. Similarly, despite Rogo and the team eventually demonstrating their increased profits, management is initially wary of accepting the new measurements and tactics as more than a “freak phenomenon” that will ultimately crash and burn. Goldratt underlines the challenge that we can all have with questioning accepted principles. The principles of “we’ve always done it this way” and “everybody else does it this way”, though illogical, can be scary to break with.

The Theory of Constraints.  Goldratt talks us through the process of finding the constraints in your system (the bottlenecks – in this case, specific machines in the manufacturing process whose speed limits the others), creating practical solutions for easing the load on those constraints, and then building a secure and consistent environment where you can continually improve without jeopardising the flow.

Since the book is written as a story, not all the lessons are spelt out for us, but many other things can be drawn from the narrative. Here are some of the really important ones that I wanted to call out:

The importance of team buy in. Throughout the challenge at the plant, Rogo enlists the help of his management team – his best people. Though he does plenty of thinking himself, he makes a shift from command and control style management, and gets the whole team working together. Towards the end, he even gets his team helping him think about how he can be a better leader and help them in their roles. He often has the whole team involved in solving a problem come together in the same room for a number of hours to really pore over the challenge.

Work/life balance and taking time for reflection. It would be easy to dismiss the side narrative about Rogo’s family as being “narrative fluff”, but I don’t think we should. When we meet Rogo, his marriage is breaking down and he never sees his children. His life is spent jumping from crisis to crisis at work, and it’s only when his plant is threatened with closure and his wife leaves him that he is forced to address his working patterns. Many of us face the same challenges to an extent during our working lives.

I’m pretty layered as a person and artiste – Connor