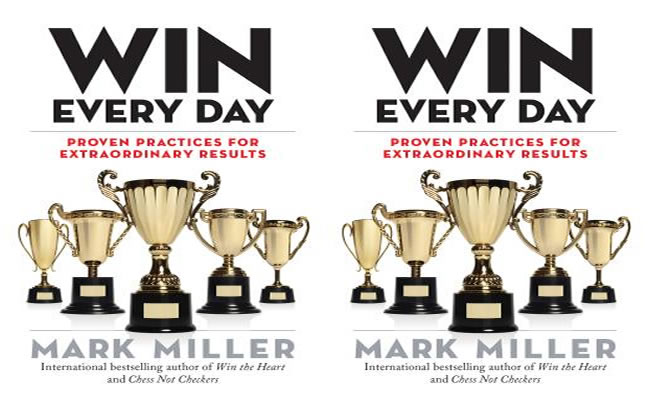 Win Every Day is Mark Miller’s fifth, and final, book in his High Performance Series. This book focuses on execution, the hallmark of all high performance organizations. As the book begins, Blake, the CEO, becomes aware of a nightmare for his organization. A very bad customer experience involving a previously loyal customer has gone viral. A video has been viewed by more than a million people in just twenty-four hours.

Blake goes to Ashley, the new head of Production for some answers. She tells him that the organization’s execution has been slipping for several years, but has seemed to level off. It’s obvious that changes need to be made. But first, she states that leadership has to determine if performance is “good enough”. After all, they have been successful against their current competition. But the organization will need to decide how great they want to be.

Blake is also the chairman of the local school board. In that role, he encounters a similar problem with the school’s football team. They have been good, but not great, winning about 60% of their games over the past several years. Is that good enough? It is ultimately decided that it is not, and they decide to hire a new coach. Ashley attends the next executive committee meeting and tells the leaders that the organization is not great at details. The organization has been making mistakes on 7% of their orders. Blake asks what would happen if their reputation for accuracy and execution rivaled their reputation for customer service.

Tom is hired as the new football coach at the high school. He has moved to the area to be close to his Dad who is very ill. As Tom is introduced to, and speaks to, the entire study body, he casts a powerful vision of what the football team can be. After listening to him, Blake decides to reach out to Tom to see what he can learn from him, and they set up regular mentoring meetings.

Even though he has never played football, Blake’s son Clint is so inspired by the new coach’s vision that he decides to attend the tryouts, which actually turn out to be more like an extended orientation for the team. In the first three sessions, the coach goes over his three fundamentals. The first is Pursue Mastery. The essence of Pure Mastery is the decision and resulting personal effort to do whatever you are doing right. It is a lifelong pursuit. The coach uses these sessions to determine who will embrace his fundamentals before they ever take the field.

Blake brings what Clint has told him about the first tryout to his team at work. Ashley tells him that he and the other leaders are going to have to paint a compelling vision of the future, and help people to see the value of pursuing mastery.

Tom uses a competitive exercise to teach his team his third fundamental, which is Help Others Win. He goes on to tell his team that he cares about each them as people, not just as players, and that he wants them to Win Every Day for the rest of their lives. Their time on his team is intended to serve as a launching pad for them to accomplish more in their lives than they had imagined possible.

Blake is convinced that the ideas Tom is teaching his players could have a tremendous impact in his organisation as well. In one of their mentoring meetings, Tom shares with Blake that for each of his fundamentals, leaders have additional responsibilities, and then he shares those with Blake.

Tom’s senior leadership team. That plan borrows heavily from Coach Tom’s fundamentals, as they believe it captures well what the best organizations in the world are doing. The plan is adopted and they begin to implement it across the organization.

Meanwhile, Tom’s football team goes on to have a very successful season as they implement his three fundamentals.

Mark Miller has given us another excellent book – based on extensive research and validation – to learn from. He completes his High Performance series by telling us that high performance organizations all do four things: Bet on leadership, act as one, win the heart and excel at execution.