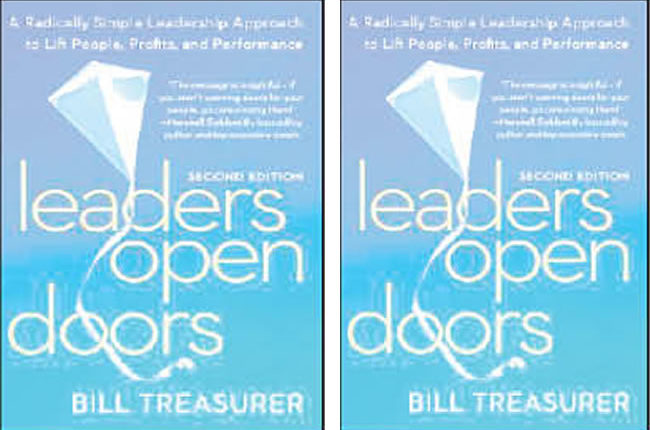 When I went to my first serious job, there was a big buzz about the ‘Open Door Policy’. Bill dispels that myth in the context of open-door leadership. He says “Open Door” is not a policy of keeping your door open, it’s about taking action to open doors for others. You will love the story he shares on this topic. In fact, this book is full of stories that will make the subject of being an open-door leader come alive.

In a candid, easy conversation style of writing we all understand, Bill Treasurer gives us the keys to understanding what an open-door leader does and how to transform from problem-solving, critical thinking mentality to a mindset that treats leadership challenges as opportunities, not problems. Bill asks the question, “Do you aim to be a problem-focused leader or an opportunity-focused leader?” What if, instead of thinking about what keeps you up at night, you transformed your thinking into what gets me up every morning? At the root, the situation is the same, but the reaction breeds a different result.

There is nothing quite as motivating as having something to prove, and so the Proving Ground Door is introduced. As a leader, you are responsible for assigning challenging work to people, but give them these opportunities in absorbable doses. Allow them to prove themselves without setting them up for failure. In your strategy for opening doors think of opportunities in graduated stages: small, medium, large

The Thought Shifting Door discusses the mental nature of providing opportunities. To open up opportunities, people need to think imaginatively. This chapter introduces three aspects of thought shifting. 1) disrupt normal thought patterns; 2) use symbols or metaphors to spark new thought; 3) small language changes – this, to make a difference in thoughts and attitudes. For example say “pretty good” instead of “not bad”.

We gravitate toward people most like us, don’t we? That’s not a bad thing, but we can all use a little work in the area of welcoming ‘Others’ who are different from us. In this chapter we learn the way to a stronger, more diverse organization is through opening doors for people who are not just like us.

Five leadership tips to help you stay afloat in crisis