Review of John C. Maxwell’ Leadershift: The 11 Essential Changes Every Leader Must Embrace 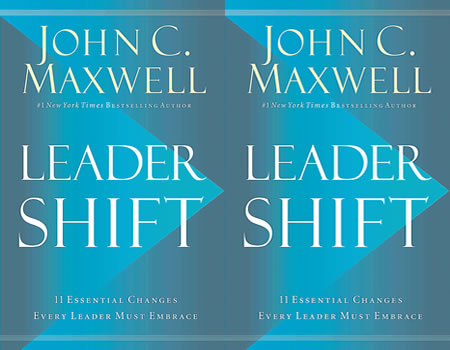 John C. Maxwell has sold thirty million books in fifty languages, earning him recognition as the world’s most influential leadership expert. In his new book Leadershift: The 11 Essential Changes Every Leader Must Embrace, he introduces a new concept into the leadership lexicon: a leadershift that he defines as: [the] ability and willingness to make a leadership change that will positively enhance organizational and personal growth.

Maxwell begins by reiterating the traditional delineation between management and leadership. Management principles are dependent on stability – quantifiable inputs delivering predictable outputs. Leadership, by contrast, guides the organization into the unknown future of the organization.

Leadershifts, the author proposes, represent an acknowledgment that this journey forward into that unknown is travelling at a much faster rate than ever before. In addition, the parameters of that unknown future are becoming increasingly ambiguous as technology gives us the capability to deliver unanticipated paradigm shifts in much shorter time frames.

Disruptive technologies such as the printing press, the personal computer, and the internet will continue to arrive at a rapid pace and to be as unexpected as their predecessors.

If leadership felt like changing all four tires on a car while travelling at ninety miles an hour down the interstate, leadershifts elevate that analogy to changing the oil on a jet fighter flying at Mach 1.

To make that shift, Maxwell argues, leaders must embrace eleven essential changes including how they approach their role as a leader, how they motivate and develop their direct reports, and how they guide the future growth of the organization.

For example, in the past, achieving a senior leadership position required diligent ladder-climbing to reach the top of the organizational pyramid as the CEO. As a leadershifter, you focus on building that ladder for others to follow in your footsteps, making you a collaborative conductor rather than a standout soloist.

Even in the traditionally senior role of conductor, you must still be willing to forego positional authority in favor of earning the moral authority of the people you lead. Part of that responsibility includes building diverse teams that are motivated to challenge existing norms in transforming the organization. Chasing prescriptive growth targets sent down from on high has no place in this new world.

One of the toughest challenges may be the willingness to abandon strict adherence to formal leadership training in favor of a more freeform role as a transformational leader. Inspiring people to reach beyond their own perceived limitations and committing to becoming a positive voice in the lives of people who were formerly just direct reports will be a true paradigm shift.

Leadershift adds a new concept to the leadership lexicon. To succeed in this fast-paced business world, leaders need a dramatically new approach to the responsibilities and obligations of leadership. Maxwell offers a comprehensive blueprint for change distilled into 11 essential behavioral changes.

Review of Yejide Kilanko’s ‘Daughters who walk this path’