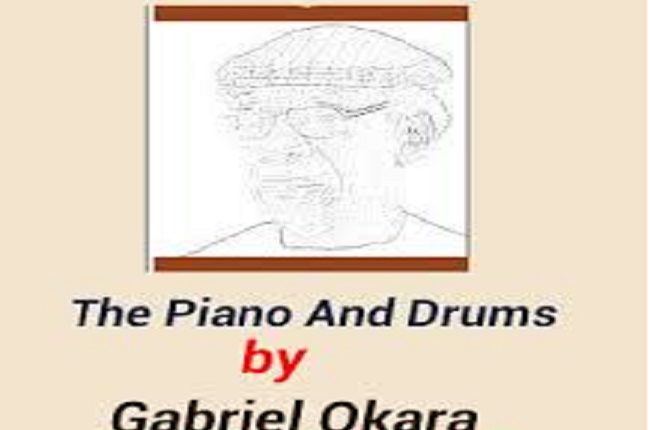 “Piano and Drums” by Gabriel Okara is timely and evergreen especially if one considers its postcolonial relevance. The poetic persona uses the picture of the ecosystem (natural) to display the complexity and the simplicity that goes along with the Piano and the Drums respectively. “The riverside at the break of a day” is typical of the serenity of the natural landscape imbued in the African socio-cultural environment. It is at this state of calmness that the poetic persona hears the “jungle drums telegraphing”.

In a more general sense, the poem shows the easiness at which the jungle operates amidst its “mystic rhythm” – its supernatural enhancement. The interaction and behaviour of the natural environment are worthy of note and it also demands critical attention. This naturalization of the environment is depicted in the following lines – “panter ready to pounce”/Leopard snarling about to leap”/”the hunter crouch with spears poised” – This is only achievable through the peace and freedom that the poetic persona enjoys within the confines of his natural enclave. This is indeed the beauty of the African life before the intrusion of Western imperialism.

ALSO READ: Review of Wole Soyinka’s ‘The Lion and the jewel’

The arrival of Western imperialism is what the poet refers to as a “wailing piano”. This is very strange to the poetic persona unlike the sound of the drums which is associated with the simplicity of living. The piano is speaking of “complex ways”. This shows the difficulty that goes along with imbibing new cultures. According to an Online Dictionary, wailing is “a loud drawn-out scream which does not bring comfort”. In other words, the presence of the “wailing piano” and the “new horizons” bring confusion and frustration.

The poetic persona ends the poem on a more conservative note in the sense that he foresees a situation where he is caught in the web of indecision. This indecision is captured by the poetic persona thus “And I lost in the morning mist” …/”wandering in the mystic rhythm”. This shows his confusion on whether to stay put in his simplified African way of life or to follow the sound of the “wailing Piano” – symbolizing the Western ways of life.

The thematic thrust of this poem is that of a cultural clash. The problem of cultural clash usually surfaces in all colonised societies. There is confusion in the area of language. The argument borders on which language to choose as the national language. This rivalry usually occurs between the coloniser’s language and the indigenous languages. Africans are ashamed to speak their indigenous languages whereas they feel comfortable in speaking the white man’s language. Also, in all postcolonial societies, the psyche of the indigenous people has been tampered with. The indigenous peoples have been skimmed into not placing any value on whatever belongs to them. Another important issue raised in this poem is that of the dilemma in which the poetic persona finds himself. There is confusion as to the route or the right way to follow – the sound of the drums or the wailing Piano. Though he prefers the African simple way of life, the coming civilization cannot be jettisoned totally. Conclusively, a better world is achievable if we constructively imbibe and domesticate both the African and the Western ways of life.

Odetade Ibitayo Odekunle is a lecturer in the Department of English, Adeyemi College of Education, Ondo.