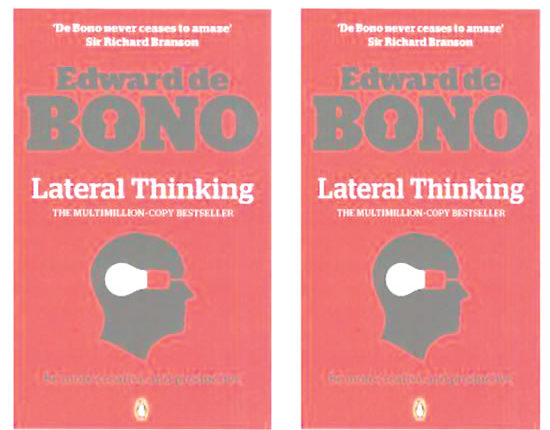 If I were to name my favourite things in the classroom, that would be triple C – creativity, communication and Cthulhu. Lateral thinking is something I really enjoy – thinking out of the box is fun for students, but for teachers it’s a necessity: how can you survive teaching the same stuff over and over again without being repetitive and, even worse, without getting tired of the monotony that goes with it?

For our own sake we should set our mindshift on the change, on creativity, on new ways of approaching old problems – that is how we will adjust our classes to various groups and students and ultimately make our lessons more varied and personalised and ourselves better professionals.

A short yet very inspiring book everyone should read is “Lateral Thinking” by Edward de Bono, who created the term lateral thinking, wrote the book Six Thinking Hats and is a proponent of the teaching of thinking as a subject in schools. Naturally, for people mad about the research the fact that there is no bibliography in de Bono’s book might be somewhat disturbing, however it is an inspiration worth reading.

The book, as every good book, starts with a story – a riddle about a small black stone and about a fresh perspective on a problem. It’s a good tale and it shows you various ways you can use a new approach to tackle an old problem. Obviously, it is quite difficult to start thinking creatively, so de Bono explains the way people conceive ideas in a surprisingly understandable manner, presenting visual element to explain quite difficult theory.

For example, de Bono declares the “obvious” solutions as the “dominant” ideas – and he proposes to put them aside while tackling the problem. We cannot blind ourselves with the obvious, if we want to achieve a more creative and uncommon idea. The danger of such thinking is that we may end up stuck with the obvious because there is no certainty of finally coming up with a new, fresh idea that will prove as useful as the old one.

De Bono mentions also the importance of the doubt and of the accident – sometimes it’s one or the other that inspire us to creative thinking (like the Isaac Newton and the famous apple that fell down from the tree right to the field of physics). The thing about lateral thinking is that in a way we let our mind wander trying to find something that will help us solve the troublesome issue. However, there is nothing certain about this process and yet, sometimes a random encounter may help us see a new and wonderful idea.

Why do kids stop playing, asks de Bono and answers: because the world stops being a new and wonderful place full of discoveries and adventures. Leaving dominant ideas and practising lateral thinking may help us enjoy the process of thinking as truly creative, enjoying the new challenges our life gives us – and make everyday problems part of extraordinary life.