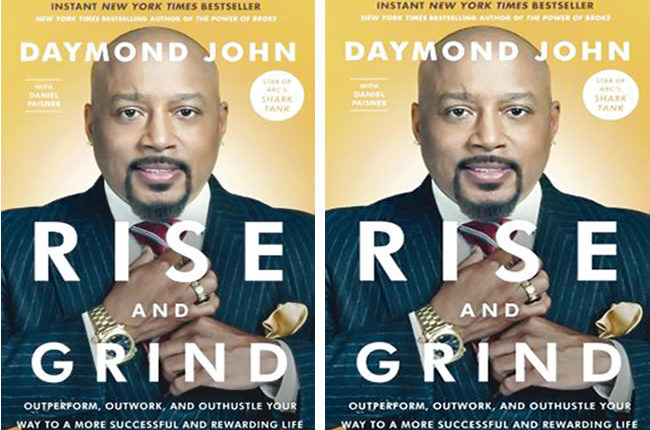 If I had to use one word to describe this book, it would be this: awesome.

When you flip through the pages of this book, you will get inspiration on every single page. This book does a fantastic job of being the motivating factor you need no matter where you are in life. You could be a 16-year-old trying to find inspiration to start whatever it is you want to start, or you could be a recent retiree looking for that extra jolt of energy to pursue whatever it is you’ve always wanted to do.

Daymond tells you the secret of what makes him so damn successful and how you can do the same. He has 15 other successful people in this book, all with a chapter of their own, relaying how they rise and grind.

The rising may be the most important aspect of getting what you want. How will you be able to get things done if you don’t rise?

They spend this time more wisely than others too. Most successful people have a morning routine that they do every single day: They exercise before getting their day going, they read, they meditate, they write out their goals.

Rising before most people get up has extreme benefits.

The following are the first few sentences of the first chapter:

“My thing is to push, to reach, to grind. I get up — before the sun, some mornings — and start grinding at my goals, hard. I go to sleep — stupid-late, most nights — still grinding. Because when I hear people say there isn’t time enough in the day to do everything they need to do, it gets me hot, and not in a good way.”

Right after these first few sentences, I was hooked. You hear people say all the time, “I don’t have enough time to do this.” Everybody has the same 24 hours in a day. How you use them is up to you.

There’s no cap on what you can accomplish. If you can picture it, you can make it so. Be the change you want in your life. If you’re willing to put the work in.

What’s the point in rising if you won’t grind? There is no point. With the way technology and the internet is today, you can grind at any hour in the day. Maybe you’re a person who likes to take it slow in the morning and really get after it in the afternoon, or in the deep hours of the night. In today’s day and age, this is completely possible. If it was possible to grind 24/7, you could absolutely do that. You have all the power in the world at your fingertips. The time is going to pass anyway, so you might as well use it productively.

You can look down the line of all successful people. It doesn’t matter if they’re a business person, athlete, artist, musician, etc. They all got to where they are today by grinding day in and day out.

There is one chapter in the book where Daymond talks about a day in his life. And it was jam-packed.

All of that in one day, and cross country. That’s the definition of a grinder.

Listen to this “power fact” from Rise and Grind, “When people set and identify specific goals, it leads to higher performance 90 per cent of the time.”

Write your goals down folks, it keeps you focused on your grind.

Rising and grinding will open doors for you. If you can rise every single day and get out the door before most people, and then grind until tiredness overcomes you, then I promise you will benefit in the end.

Review of Ahmed’s ‘How To Bring Your Customers Back’