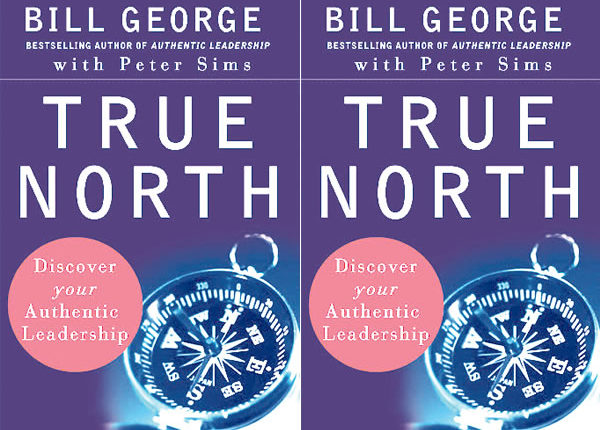 Bill George was an inspirational, high-achieving leader at the medical instrument company Medtronic, which he grew to become the world’s leading medical technology supplier. Elected CEO in 1991, he became one of the most admired CEOs of his generation as he grew Medtronic’s market capitalization from $1.1 billion to $60 billion, averaging 35 per cent a year from 1996 to 2002. He then became one of the world’s foremost teachers of leadership, as a Harvard Professor and best-selling author.

Most leaders, says George in True North (the follow-up to his book Authentic Leadership) , act the way they think a leader should act, based on leader archetypes (think Churchill, Jack Welch), or the traits, styles and characteristics that have been identified in more than 1,000 studies of leadership over the past 50 years. But, those who see leadership as emulating great leaders or acting out a set of competencies don’t truly lead, says George. You can only effectively lead by finding your authentic voice.

“In the 21st century, without authenticity in leadership, organizations can’t develop sustained growth.”

For George, leadership isn’t a job title, or a mantle that you put on when you walk into a leadership position, or a set of behaviours defined in your HR Department’s leadership competencies framework. It is the sum total of who you are.

Leadership is about what makes you different

Finding your authentic leadership is the leader’s equivalent of what the business guru Tom Peters calls ‘defining Brand You’. While most leadership theory is spent on codifying what is the same about leadership, George reminds us what the marketplace itself teaches us – sameness creates commodities, difference is what stands out.

Reminds me of my favourite quote about all leadership being autobiography: “Abraham Lincoln was once asked how long it took him to write The Gettysburg Address, the speech that defined a nation. He replied, ‘All my life’.”

There is no perfect profile of a leader

All the academic studies have failed to find the profile of a perfect leader, says George, because leaders are highly complex human beings, people who have distinctive qualities that cannot be sufficiently described by lists or traits or characteristics. Once we realise this, says George, and also realise that leadership is not a position, we can stop being bent out of shape by trying to fit into the straitjacket of leadership definitions and instead accept four liberating new laws of leadership:

The 5 dimensions of authentic leadership

Traditional leaders focus on their own success and on getting loyal subordinates to follow them to achieve that success. Authentic leaders, by contrast, inspire others to lead around a shared purpose, rather than around the leader.

This doesn’t mean authentic leaders are perfect. In fact, it is a defining feature of authenticity that you admit to your flaws rather than hide behind the mystique of the leader who can never make a mistake.

Purpose: Without knowing your purpose (why you lead) you are at the mercy of ego

Practising solid values: Integrity is the core value. If your practice slips and slides under pressure, people quickly lose confidence in your leadership

Heart: This means having passion for your work and the courage to make difficult decisions

How to become indispensable

How to walk the talk with your leadership message