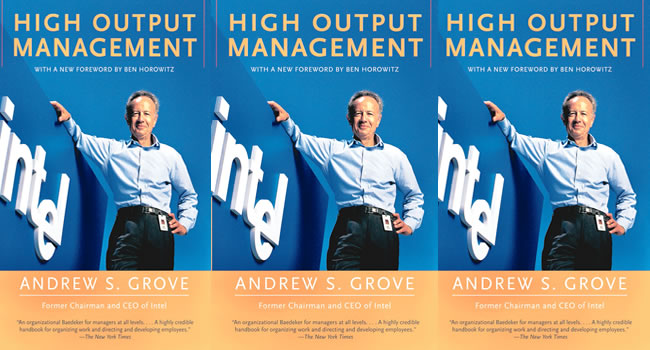 ANDY Grove was the former chairman and CEO of Intel. “High Output Management” is consistently listed on reading lists for business, management, and entrepreneurship. Andy gives his perspective on building and managing a company by focusing on effective management processes. The book is broken down into three core areas:

1) Managing is the work of a business perused by teams

Andy claims that the output of the manager is the output of the teams under the manager’s control. I found this interesting since I often heard it in the service. As a leader, I was primarily judged by what my team accomplished or failed to do. I was ultimately responsible. This is most evident to the public when an incident occurs on a Navy ship and the leadership is fired.

The author also recommends a manager have no more than six – eight subordinates. I can empathize with wanting to keep team sizes small and manageable. At some point, there are diminishing returns when growing and scaling a team and more delegation of decision making authority might be necessary. In the Marine Corps, the magic number is three. The smallest unit, a fireteam, has one leader and three subordinates. This scales all the way to the top where the Marine Corps maintains three Marine Divisions on active duty.

Andy also talks about achieving managerial leverage. In order to increase your managerial productivity you can speed up your rate of work by applying production principles (like lean principles for individual workflow) or re-prioritize your activities to focus on those with the higher leverage (looking for nonlinear activities where a small input to a team has a large output)

2) Focusing on an output oriented approach to management

Andy starts by reviewing key terms and processes involved in production. He then applies these principles to managerial activities.

The process starts by aligning goals or objectives with measurable indicators. Andy recommends indicators such as the condition of equipment or the raw material available but these can be adjusted. He mentions pairing indicators so that you don’t overreact and base decisions around a single indicator. I’ve seen this recommended elsewhere when discussing product development. This prevents developers from iterating on a feature to improve a single metric while another metric decreases, resulting in a net negative improvement of the product. This wouldn’t be directly visible if the developers were just viewing a single metric.

Andy also goes into detail describing how a manager should interact with his or her subordinates to achieve maximum productivity. One quote really stuck out to me: “When a person is not doing his job, there can only be two reasons for it. The person either can’t do it or won’t do it; he is either not capable or not motivated.”

A manager’s job is to train subordinates so they can accomplish a task independently and to create an environment where motivated people can flourish. The manager can set goals that are slightly out of reach of the individual to keep them challenged and motivated. The direct report should have metrics to track their progress, preferably ones that are tied to the success of the overall organization. Lastly, the manager should use the performance review to provide feedback on the person’s ability to achieve the goals.

Andy also presents a framework for determining how involved a manager should be in a task delegated to a direct report. He defines “task relevant maturity” as the competence of the individual related to that specific task. An individual could be low for some tasks and high for others. For tasks where the individual has a low task relevant maturity, Andy recommends a highly structured approach where the manager is detailing how a task should be accomplished. At the medium level, the focus is on two-way communication between the manager and subordinate about the task, with the manager providing support and encouragement. For someone with high task relevant maturity, the manager just provides the overall objective and passively monitors the progress of the task.

Who is dividing the north?

Review of Beyond Collaboration Overload

Review of Mark W. Johnson and Josh Suskewicz’s Lead from the Future: How to Turn…