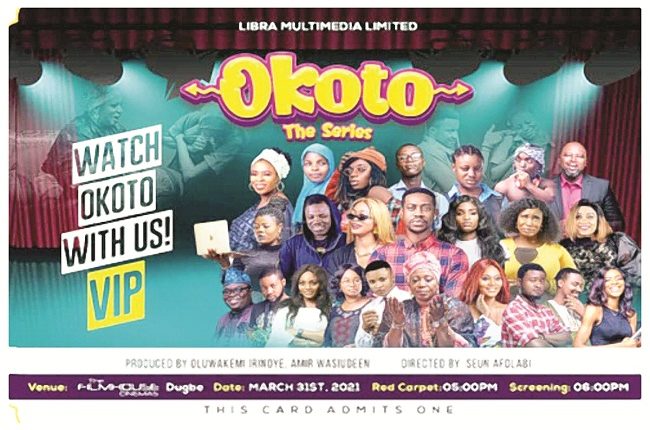 When I got the VIP invite to watch ‘Okoto: the series’, the first thing that struck me was the packaging. Customised box containing pillow, facemask, T shirt and VIP ticket that was pleasingly branded (I expect nothing less from Libra TV boss Lekan Wasiudeen though). The graphic design had a lot of actors on it, but wasn’t as clumsy as many others I see on a daily basis. The T shirt remains my favourite, very good quality and will definitely become one of my preferred inner wear.

Back to the actual screening! Shot majorly or totally in Ibadan, this body of work showcases the city like none other…the overhead drone shots are breathtaking and it is little wonder Ibadan has become the latest bride for movie makers.

The much-anticipated new drama series titled Okoto co-produced by the duo of Oluwakemi Irinoye and Amir Wasiudeen, directed by Seun Afolabi is set for a private VIP screening.

Okoto is a millennial drive drama that tells the every day experience of an average African youth, their dreams, aspirations, hopes and struggles; the hustle, the discouragements and the uplifts.

“Okoto tells how life happens to us all, with relatable characters showcasing challenges and situations that happen to average Nigerians with a flavour of what the beautiful city of Ibadan has to offer,” she said.

Irinoye revealed that the production of Okoto took place between November 2019 and February 2020.

The dialogues and progression are great! Some scenes could be shorter but I guess the private screening was largely the full version. Some of the characters to watch out for are social media influencer and fashion enterprenuer, Kiekie, who plays Ese (who is simply the real Kiekie because I saw no difference). She thoroughly interpreted her role. Damilola Oni also came through with her role while Lateef Adedimeji and Binta Ayo Mogaji as usual, will leave you breathless from laughing. Mimisola Daniels, Segbowe, among many others also delivered! Many old and new faces make up the series called Okoto and this one, I truly enjoyed. The plots and twists are simple, relatable and well scripted.

While it will be shown exclusively on Libra TV (online), many people spoken to after the premiere opined that the series be extended to satellite television platforms later so that more people can appreciate the amount of work that was put into the production.

In spite of the huge investment in the water sector by the government and international organisations, water scarcity has grown to become a perennial nightmare for residents of Abeokuta, the Ogun State capital. This report x-rays the lives and experiences of residents in getting clean, potable and affordable water amidst the surge of COVID-19 cases in the state…Libra TV scores a hit  Libra TV scores a hit

The Lagos-Ibadan railway was inaugurated recently for a full paid operation by the Nigerian Railway Corporation after about a year of free test-run. Our reporter joined the train to and fro Lagos from Ibadan and tells his experience in this report…Libra TV scores a hit  Libra TV scores a hit

Whenever you travel during holidays, keep this in mind…