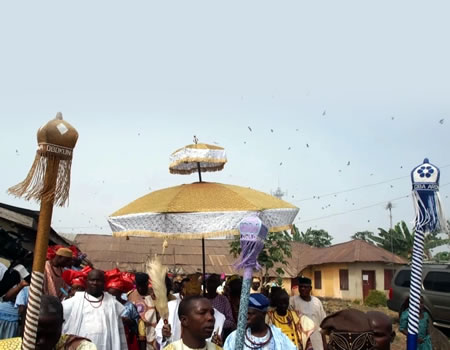 THE origin of Ilesa, the traditional headquarters of Ijesaland can be traced to two interrelated historical sources. Ijesa-Ekiti Parapo was named by the British colonial administration on 21st of June, 1800 comprising of the present day Ondo and Ekiti states of Nigeria, and founded 1,350 years ago by ‘Owaluse,’ a grandson of Owa Ajibogun Ajaka, a great warrior, Owa Obokun Onida Arara, the most accomplished son of Oduduwa, the progenitor of the Yoruba race.

Ilesa, one of the ancient towns in Ijesaland, even among the towns in Yorubaland, originated through two historical sources. One of the accounts indicated that it was founded by Owa Ajibogun, one of the 16 sons of Oduduwa; while the second source indicated that Obokun, a younger son of Oduduwa, established the pre-existing structures built on a solid rock of confederacy of five towns in Obokun area.

The town Obokun was, therefore, regarded as the central rallying point of all Ijesas and their ancestral home, which gives credence to why all Ijesas refer to themselves as ‘Omo Obokun,’ meaning the children of Obokun.

Ilesa, ruled by the Owa Obokun Adimula, is one of the earliest and most influential kingdoms, sharing a border with Ile-Ife, the ancestral home of the Yoruba race.

Ilesa also shares a border with Osogbo, the capital of Osun at Osun-jela. It also shares borders with Ondo and Ekiti states at Owena-Ijesa and Ita-Ore respectively.

Ijesaland, of which Ilesa is the capital, had the first five or six rulers of the dynasty associated with other federating towns of Ipole Ijesa, Itagunmodi, Imesi, Ijebujesa, and Ibokun, whose inhabitants are Ijesa residing around Ibokun, some 14 miles to the North of Ilesa.

Having said all these about Ilesa, it is important to note that one of the most important festivals in the town is the the Iwude Ijesa festival. In the past, the festival was known as Iwude Ogun, and it is dedicated to the worship of Ogun, the Yoruba god of iron.

Iwude means the gathering or assembly of Ijesa sons and daughters both at home and in Diaspora to witness the festival.

According to myths, Ogun in Yorubaland, was one of the sons of Oduduwa who became a renowned hunter and powerful Oba in Ile-Ife. Also, in the statement of one High Chief John Agboola, the Ogboni of Ilesa, “Iwude is very important and significant to Ijesa people, because it is the oldest festival in Ijesaland as it started centuries ago during the reign of one of the Owas called ‘Owaluse’.

Iwude began when chiefs, in the past, conspired against ‘Owaluse,’ and the Oba left the throne for Oyo kingdom, because of the king’s relationship with the Oyo empire, as one of the children of Oduduwa.

In Owaluse’s absence, another king, Oba Owari, was crowned. When Alaafin heard all that happened to Owaluse, he got angry and decided to wage war against Oba Owari. On hearing this, Oba Owari abdicated the throne and fled on exile to ‘Epo-Ile,’ a town near Ilesa, that is now known as Ipole in Atakunmosa East Local Government Area of the state.

When Owaluse returned back and met the throne empty, he took over the throne and in order to consolidate his power back on his throne, Owaluse chose a day to move round his domain to appreciate his loyalists and supporters.