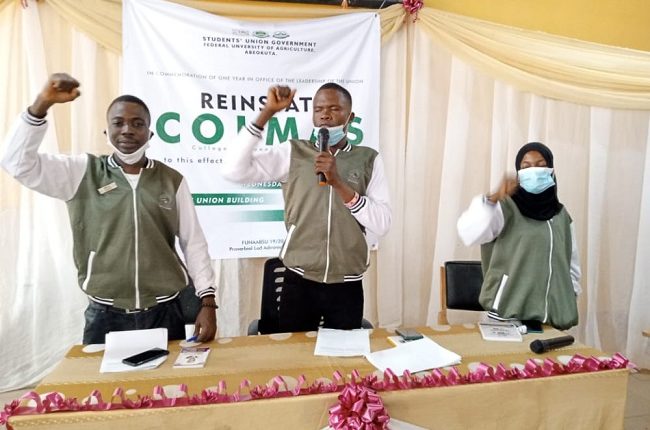 The Student Union Government of the Federal University of Agriculture Abeokuta (FUNAAB), has appealed to the Federal government to as a matter of urgency restores management science courses in all specialised federal universities in the country.

The union made the appeal through its President, Comrade Michael Oloyede, at a press conference on Wednesday, held at the university campus, Alabata, Abeokuta.

Oloyede, flanked by other students union leaders, explained that the order by the FG in 2017, directing all specialised universities in the country from running programmes that were “antithetical to their mandates” to stop such had restricted students from the state from having equal access to higher education in the country.

He added that the delisting of management courses from courses being run by the University had put so much pressure on other universities offering management science courses.

Oloyede said the decision had sent a wrong signal to the people of the state about the intention of Federal Government to retard the educational progress in the Zone.

“The delisting directive of the Federal Government, apart from denying many indigenes from the State access to University education, has also put much pressure on the other Universities offering courses in Management Sciences and further shut the University admission door against several others.

“As a sign of discontent with delisting, the Paramount Ruler of Egbaland, Oba Adedotun Gbadebo, has written open letters to the Federal Government on the need to restore the programmes and held press conferences on this issue in 2017 and 2018, and yet, nothing has come out of all these.

“The new policy directive delisting management sciences from federal universities has posed a serious threat to future educational needs of the citizens for programmes in Accounting, Banking & Finance, Economics, Business Administration and Entrepreneurial Studies given that catchment area criterion is used for admission into Federal Universities in Nigeria,” he said.