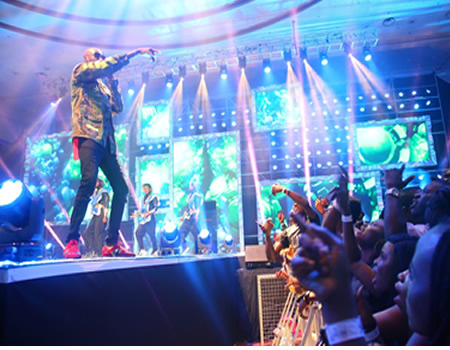 THE hype and buzz that accompanied the recent Soundcity MVP (Most Valuable Player) Awards Festival at the Eko Convention Centre of Eko Hotels and Suites, Victoria Island, Lagos heightened the frenzy.

Introduced in 2016 by Consolidated Media Associates, owners of Soundcity Africa (Television, Radio and Digital) to replace the popular Soundcity Music Video Awards which was finally rested in 2010, the organisers deployed their various media platforms to promote the event. With huge viewership on its TV channels and listenership on the radio station, Urban 96.5FM, the message was bound to reach a wider audience. At a time when the industry boasts of a few reputable music awards platform that can capture showbiz aptly, SMVP Awards Festival is a breath of fresh air. More so, as the awards have positioned itself as a Pan African event by going beyond Nigeria to appreciate artistes from other African countries.

While the huge turnout spoke volumes for the organiser’s reach, the massive hall which was transformed into a showground of sorts could not accommodate all. There was barely any unoccupied space in the ground floor of the hall.

It was not different upstairs. Even the VIP section which accommodated nominees and celebrities was so packed that some attendees only had room to stand. The female protocol officials had a hard time persuading to move away from blocking the view of those seated. But their pleas fell on deaf ears. It took the intervention of security personnel to convince them to either squat or leave. This respite was however short-lived. Once the guards left, they resumed their position. At this point, the female ushers gave up.

Nevertheless, the SMVP Awards Festival was a very brilliant show. In fact, it has raised the bar for music award shows. It was also a big testimonial to the excellence and professionalism of the CMA helmsman Tajudeen Adepetu.
For five days, Adepetu and his team worked tirelessly at the venue to achieve the desired result. Carpenters, sound technicians, event planners, stage designers gathered at the site daily to transform the purlieu. The walls of the hallway leading to the main hall were covered with a design of the nominees. Although there was a dedicated red carpet area right outside the convention centre, the floor of the hallway as well as the lobby leading to the events hall was draped in red. Inside, the auditorium was a continuum of glitz and glamour.

The lighting and visual randomisation spread from the screen on stage to the ceiling and walls, creating a fascinating effect befitting of an event of suchcalibrer. The aesthetically designed stage was T-shaped. This allowed winners of the event to easily waltz into the stage from their seats instead of going through the backstage. Only the performers, host, and award presenters made use of the main entry and exit on stage.

No doubt, Adepetu threw everything into the ring to have a spectacular show. This was largely made possible by three major brands, Guinness, United Bank of Africa (UBA) and Coca-Cola that threw their weight behind the ceremony.

Perhaps, Adepetu’s hat-trick was the theatrical script that was delicately brought to life on stage. Each music act that came on stage was a delight to watch, not necessarily because they were better performers but the skilled choreographers who accompanied them showcased pulsating displays. From their costumes to their dance steps, they electrified the atmosphere.

Moving to the rhythm of the beat, they swayed their hips, twerked while on all fours, rolled on the floor, rubbed their rear seductively, then performed a sexual move that required them thrusting their hips upwards while their shoulders rested on the floor. Their performance left most members of the audience jaw-dropped.

But Skales’ performance was just a foretaste of what to expect for the night. Junior Boy’s performance of ‘Irapada’ was very dramatic. The dancers waltzed into the stage dressed in traditional Yoruba costumes. The ladies were dressed in ‘iro and buba’ with big headgears while the guys wore ‘buba and sokoto’ with matching caps. Their gestures indicated that they were in a party setting where the ladies gossiped, clapped hands while grabbing their men for a dance.

There was no way Small Doctor could be outdone. He came on stage with his own group of dancers dressed in red football jerseys and shorts as he rendered his wave-making hit ‘Penalty’. The dancers displayed football skills on stage and jogged from one end of the stage to the other, imitating the training routine of footballers.

The audience was however deprived of a good theatre display during Kiss Daniel’s performance of his dancehall tune ‘Sofa’. The back-up dancers did not come to the stage on time and by the time they arrived in pairs; the crowd was already carried away by the song as they sang along with the artiste. His second performance ‘Yeba’, another favourite of the audience, however, saw the dancers entertaining the crowd with their moves.

However, it was Iyanya that totally stole the night. He was the only performer who did not rely on the popularity of his songs to entertain the audience but actually immersed himself in his performance. A very good dancer, he jumped, waved and moved along with every dance step. This showed that he must have rehearsed very well with them. Performing his newly-released single ‘Good Vibes’, the Mavin Records singer who was dressed in an all-white apparel had the time of his life while performing with his team of choreographers. His performance was very well applauded.

When Tiwa Savage came on stage to perform with Alternate Sound Live Band, everybody expected a live performance. But along the line, the DJ cued in her songs: ‘Malo’ featuring Wizkid and ‘All Over’.

Apparently, her act was an opportunity to showcase the very impressive live band. Interestingly, 2Baba who usually performs with a live band was without one at the event. Notwithstanding, he was the crowd’s favourite. Performing his popular hits including ‘Gaga Shuffle’, he ended his act by calling on the government and security agencies to put a stop to the recent killings by Fulani herdsmen in his home state, Benue. It was a bloody New Year celebration in the state when a gang of marauders attacked some villages, leaving scores dead.

While Nigerian artistes had a good outing at the show, South African rappers EMTee and Cassper Nyovest, and Ghanaian act Sarkodie who took home the Best Collaboration Award for ‘Pain Killer’ his collaborative effort with Runtown (not Patoranking as author and OAP Toke Makinwa excitedly announced on stage) ; didn’t fail to excite the audience. Cassper displayed his hip-hop dance moves as he performed his 2017 hit single ‘Tito Mboweni’,
while Sarkodie basked in the glory of having the audience singing back the lyrics of ‘Pain Killer’ to him. EMTee, on the other hand, got the crowd all rolled up during his rendition of his popular track ‘Roll Up’. Other artistes who graced the stage were M.I., Seyi Shay, Yemi Alade, Dice Ailes and Realself among others.

Davido was the man of the night. Right from his arrival, he caused such a frenzy that his fans ignored the happenings on stage to focus on him. He won the most number of awards for the night. His 2017 super hit ‘If’ fetched him two awards ‘Song of the Year’ and ‘Video of the Year’.

He was also the recipient of the biggest award of the night: ‘African Artiste of the Year’. Maleek Berry also took home two awards for Best New Artiste and Best Pop. Olamide and Wizkid took one award each: Listeners Choice and Digital Artiste of the Year respectively. Tiwa Savage was the only female winner of the night. She took home the award for the Best Female MVP. Other winners of the night include Cassper Nyovest (Best Hip Hop) and Diamond Platnumz (Best Male MVP).