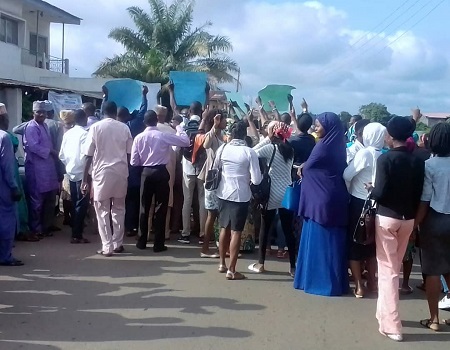 Residents and traders of Irekari and Temidire communities on Saturday protested against the indiscriminate location of gas stations in the area.

The residents who trooped out in their numbers to disrupt commercial activities and free flow of traffic for many hours vowed to prevent the gas stations from operating.

According to the protesters who said the protest became imperative because of an attempt to locate another two gas stations near an existing one in the area, saying the development could lead to fire incident that would consume the entire neighbourhood.

One of the protesters, Abudu Raheem, explained that a midnight inferno which occurred behind a new gas station in the area some 24 hours earlier triggered the protest.

He said the fire which started in the middle of the night, razed five rooms and shops, destroying good worth millions of naira in the shops which included big deep freezers, four big generators and others electronics gadgets.

He noted that the Federal government, last week through officials of the Department of Petroleum Resources, (DPR) in conjunction with the Nigeria Security and Civil Defence Corps, NSCDC) commenced the clamping down on illegal structure housing on the roadside.

Similarly, two of the protesters, a youth leader, Abayomi Ajijola-Ajofe and a trader, Kazeem Jinadu, said the people of the two communities would resist any attempt to locate another gas station inmate area.

Ajijola said, “we are protesting because we don’t want another gas stations in our area, we have one already, that is okay, because of the fire incident that can consume our houses.

“We might take some action which may not be palatable to the dealers of the proposed gas stations. We learnt one government’s agency (DPR) has given them license or permission to operate, we will not take that, they should withdraw the licence now or else, we will make this area unpleasant for them.”

The Chairman of Temidire landlords, Mr Ibrahim Adewuyi called on the Ondo State government and the DPR to withdraw the certificate of allocation of the new gas stations in a bid to curtail another fire outbreak, saying the location is too close to the plank shops.

A plank seller, Mrs Jumoke Akinsele, said, “plank sellers association hereby appeal to our governor, Mr. Rotimi Akeredolu to stop the location of another gas station beside a filling station, some houses and shops were on fire yesterday. Most of us are widows, this is where we get money to feed our children and send them to school, we don’t want the fire to consume our markets.”