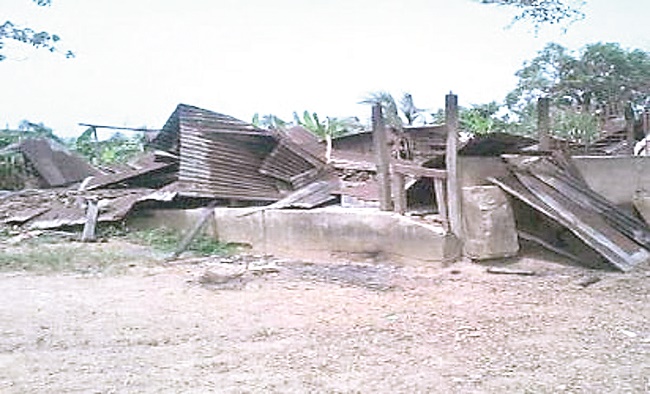 In this report, INIOBONG EKPONTA takes a look at the devastating effects of cult activities, subjecting Oruk Anam Local Government Area of Akwa Ibom State under the vice-grip of killings and violent crimes in the last couple of months and government’s efforts in tackling the trend.

It started like a drizzling rain few months ago as two rival cult groups: Debam and Iceland confraternities engaged each other in what people thought was a normal battle of supremacy, but currently the problem has degenerated to a monstrous level.


Nigerian Tribune gathered that about four years ago, several local residents of Etim Ekpo and Ukanafun were abducted for ransom and taken across waters to neighbouring Rivers and Abia states. Some were killed for not complying with the demands of their abductors, while others were maimed for incomplete ransom payment.


However, following several appeals from religious leaders and stakeholders, an amnesty deal was brokered and Governor Udom Emmanuel asked them to drop their arms for rehabilitation.
Then police commissioner, Mr. Samuel Ogunjemilusi, supervised the amnesty programme, leading to the surrender of small arms, light weapons and couple of high caliber assault rifles.


But with the 2019 general election over, many residents, who returned from safer grounds including the Iwukem Iternally Displaced Persons (IDPs) camp, have started lamenting, that “the repentant cultists have been harassing us and forcing us to part with our little cash, while raping our women and girls,” a widow, whose husband died during the cult war in Ukanafun, told Nigerian Tribune.


Speaking on condition of anonymity, one of the ex-militants from Udianga village in Etim Local Government Area, blamed the problem on what he called “government’s lack of commitment to the amnesty programme.”


According to him, “The government was supposed to engage us in vocational jobs and stipends paid to us monthly. We were told the government created two centres at Government Technical College (GTC) Ikot Akata in Mkpat Enin Local Government and at Ikot Ada Idem in Ibiono Ibom Local Government, but such capacity building programmes are still in the pipeline long after we emerged from the bush to lay down our arms.


“We had to take up arms because of government’s failure to address the challenges of infrastructure, including electricity, good roads, water, because if we have all these in place, we can engage ourselves in small businesses. Everybody must not necessarily be university graduate to be able to take care of themselves.”


In the neighbouring Oruk Anam, the resurgence of the cult crises led to the displacement of many residents, who are currently at an emergency IDPs camp at the local government headquarters, Ikot Ibritam.


A widow, who simply identified herself as Choice Etuk John, 42, who fled her home in Inen Ikot Offiong in the wake of the recent violent cult clashes between Debam and Iceland confraternities for six months, said she had to join other persons taking refuge at the council headquarters at Ikot Ibritam with her four children.


In the same vein, Obong Stephen Effiong, a community leader, relieved attempts by a retired police chief to broker peace with the militants, saying “a retired police Inspector, Okon Josiah Udo, who had wanted to play a good man by breaking the ranks of the rival cult groups in order to beg and negotiate for peace for killings to stop in the communities was heavily beaten and battered.”
However, schools, markets and religious centres have remained shut.
Little Mbetobong Emmanuel John, a primary six pupil of Q. I. C Primary School, Inen Anwa Atat, now living at the IDP camp at Ikot Ibritam, narrated her ordeal to Nigerian Tribune.


“I missed my First School Leaving Certificate Examination that would have helped me to gain admission into junior secondary school. Our school has been overgrown with weed. Nobody goes there. Now I have to wait for another one year to write the exam before I can further my studies,” she said.
Recounting their losses, the principal of Community Secondary School, Inen Ekeffe, Mr. Victor Johnson Ibuot said students from his school were merged with other candidates in another secondary school for the National Examination Council (NECO) exams.
“Even at that, some displaced students from the community missed the exams. These students did not have where to stay for the exams. We beg the Akwa Ibom State governor, Udom Emmanuel, to restore normalcy in the area,” he said.


It was gathered that prominent indigenes of the area led by the chairman, Okon Akpan Brown, under the aegis of Inen Stakeholders Forum sent few bags of rice and other food items to the victims. But the foodstuffs were not distributed as it was not enough for over the 3,000 persons.


“The response was encouraging but donations were very poor. We need government and other donor agencies especially the United Nations to assist us so that we can feed this people in the camp. We are waiting for the government to beef up security in the area and tackle the cultists so that people can return to their homes,” he pleaded.


He said the problem of the displaced persons was pathetic when they were pursued from the church premises, a temporal camp settlement for displaced placements.


“We were surprised that these persons were chased out from the church premises. They are now scattered in different compounds here at the council headquarters. People now use them for menial jobs just to give them food. Imagine people leaving their homes to turn to beggars


“We learnt that the government sent a delegation for fact finding about these displaced persons but they met one elder of the church who told the government team that the people were not there after the church had sent them away,” he said.


Last week, Mrs Martha Udom Emmanuel was reported to have shed tears when she saw the battered body of the widow, Choice Etuk John, who was attacked on her way to bring food items for her four kids in the IDP camp.
Sources confirmed that the governor›s wife through the Senior Special Assistant to Governor Udom Emmanuel on Education Matters, Mrs Idongesit Etiebet, from the area paid the hospital bills for the widow at the University of Uyo Teaching Hospital.


Meanwhile, the traditional ruler of Oruk Anam Local Government Area, Akuku Johnson Obosi, has appealed to security agencies to step up operations in the area and bring back peace for residents to return to their homes.


“I appeal to His Excellency, Governor Udom Emmanuel, to extend the security dragnet to my domain and bring perpetrators of these killings in my domain to book. I have been trying even without money to send food items to the displaced persons. Please, the government should come and help us in coming out of this crisis,” he pleaded.