Residents cry out as first rain in 2020 floods houses, drowns animals in Ibadan

•We need people’s cooperation on this matter —Oyo govt 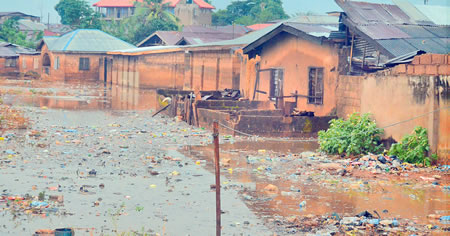 IT rained for the first time this year on Monday, March 2, in the Bodija area of Ibadan, Oyo State, and what ought to be a blessing ended up putting a sour taste in the mouths of some residents. The rain left some inhabitants of Osunkaye community of the Bodija Railway Station area crying out to the government for help, as the slight rain flooded their houses with garbage.

The rain, which started in the late hours of the day and lasted about 45 minutes, flooded several houses and saw animals drown in the community, very close to Calvary Baptist Church along the Railway Station in Bodija, Ibadan. The residents of the area are now apprehensive as regards what awaits them when the rains finally come.

A resident of the community, Adedeji Sangodiran, attributed the flooding to lack of drainages along the railway, saying since the construction of the railway a long time ago by the government, after some houses in that area were demolished, the place had always experienced flooding anytime it rained.

A food vendor popularly known in the community as Ashake Olounje, who lives very close to one of the flooded houses, explained to Saturday Tribune that the trash brought to that area by the floodwater was not hygienic as she makes food there early in the morning for public consumption.

“I cook in this area and I live around here. Looking at the way the water has flooded this area and brought rubbish with it, it is unhygienic for my customers. The refuse around that area is too much and that is why we are having a health situation on our hands here. Another thing is the small drainage there; it is too small for the water to pass through and you won’t even know it is there. We are calling on the government to come to our aid and make this environment clean and conducive for us to live in,” the food seller said.

Abayomi Oluwole doesn’t reside in the area but he lives close by. “What I believe caused the flooding is that there was no channel for the water to pass through. Even that small carnal there was done recently by those living around, but the refuse dumped around it has blocked it, so there is no way the water can pass through. Flooding has destroyed people’s property in this area many times. The government should come to our aid, because when the big rains come, the situation will be worse and everywhere will be flooded,” he told Saturday Tribune.

One of the affected residents, a lady in her mid 20’s, Bolanle Mustapha, claimed that people from other streets come to Osunkaye area to dump their refuse and this had contributed to the perennial flooding. “There is no gutter at all. I am sure you have checked the place. There is no channel for the water to pass. Some people from other streets even come here to dump their refuse. They even dump refuse in the water when it rains and it flushes down here. How will the water not flood everywhere when it rains?” she said.

Asked about the level of the residents’ compliance to government’s warning against dumping of refuse in waterways and construction of buildings within the flood plain, Mustapha said: “There is a place behind our house there where we dump our refuse and we make sure we burn them up, since we do not have any other place to dump our refuse. But the reason why it is like that is because we are not the only one dumping refuse there. People from other streets dump refuse there also and that has caused the blockage of the small carnal that the water passes through.

“When the water stands still like that there, sometimes it takes about four days before it dries out; that is if another rain does not fall on it. We are tired. We call on the government to help us. They should help construct a gutter and waterways where the water can pass through whenever it rains.”

It was an eyesore when Saturday Tribune visited the vicinity of another resident whose house was also affected. Madam Alice Adesokan, a woman in her mid 50’s, who was later discovered to be the landlady of the affected house, was seen with a rake packing out the plastic waste products and refuse the floodwater brought to her doorstep. She was packing away the refuse in order to gain access to her room. She lamented the stress the people of the area go through whenever it rains, saying they spend a lot of money every year to clear the refuse and also dig waterways for the rain to flow.

“This rain fell for some minutes but look at what we are already facing. Imagine if it had rained longer and more intensely than this, the havoc it must have caused. This is what we face here and we are tired. The amount of money we spend on taking care of this drainage and packing of the refuse every year is unbelievable. We just discussed with someone who would help us pack the refuse that the flood brought here. The person said he would take N20,000 and we were just talking about how to contribute money among ourselves to pay him.

“Anytime it rains, we are always afraid of even entering the house because the rain would have flooded everywhere and those outside won’t be able to go in, while those inside won’t be able to come out. There were some houses behind our house which were demolished during the construction of the railways there. Since then, anytime it rained, this place would be flooded. This is what we have been facing. Some people even defecate over there. The way it is now, we are fed up.

“There is just one drainage around the place and with the duping of waste in both sides of the railways, there is no way that when it rains, there won’t be flooding and the floodwater won’t bring the garbage to our doorsteps. The waste management people, the waste collectors, do not come here. Even the people contracted to go round the streets to collect refuse do dump them here. Anytime it starts raining, they will come and dump the refuse there and just litter everywhere with the garbage,” Madam Adesokan told Saturday Tribune.

Metibemu Mary, a tenant in the affected building where Madam Adesokan is the landlady, who also lamented the health implication of the flooding for her little children, suggested that anyone caught dumping refuse in the area be arrested and dealt with. She said: “Sometimes they come when people are already sleeping, around 11 p.m., to dump the garbage here. We need the waste management authorities to come and ensure that those dumping refuse here are brought to book.

However, speaking to Saturday Tribune on the efforts of the state government to safeguard lives and properties as the raining season approaches, the Commissioner for Environment and Natural Resource, Mr Kehinde Ayoola, said: “The government is doing a lot. The Ibadan urban flood management programme was initiated principally to improve the level of flood resilience in Ibadan and its environs. It is a project that is funded by the World Bank and it has carried out strategic intervention in several parts of the city and its environs and right now some works are going on 13 priority areas. I will talk more on this in my next press conference.

“In Ibadan, we have carried out a lot of interventions in carrying out and streamlining the water forces to ensure that they allow free flow of water. But there is one thing I want to pass across to the public, which is that, they have to be more responsible in ensuring that they don’t drop waste inside water channels. These rain you just talked about, people were seen or noticed dumping refuse inside it, which is wrong, because the solid wastes will not dissolve inside the water. At the end of the day, all that will be carried down the channel somewhere, where there is a bottleneck; it will get stuck there and will block the drain. With the drain blocked, when rain comes again, the water will go through the part of least resistance which will be somebody’s house, room or shop.”

On the government coming to the aid of the residents in constructing big drainages where water can pass through any time it rains again, he said: “The government will do its bit but people need to take responsibility for certain things. There are just two things I want to pass across: one is this issue of solid waste disposal. People should not throw waste inside the waterways. They should keep their wastes until the waste management companies come to carry them away. As I am talking to you, the Oyo State waste management authority workers are working day and night mapping out new routes and licensing the waste management companies that have already applied.

“We are going to license so many of them in the next few days. They will go out and pack the wastes and the people will pay them a token. The second thing I want the people to know is that building on flood plains, that is, places that are very close to major streams and water bodies is prohibited. People have built there and this has slowed down or prevented smooth flow of water in these places.”

The commissioner urged the members of the public to dump their refuse in waste collection drums and place them in front of their houses or shops. “Where the problem lies now is that when the companies that pack the waste come and they demand for the token, people don’t pay. When you don’t pay, you are not encouraging the companies to come back. So, what the government of Mr Seyi Makinde is doing is that, we have reduced what the people were paying before and now it will be less than what it used to be. It is a token and we urge the public to please cooperate with the government on this matter,” the commissioner told Saturday Tribune.

When your partner is overly suspicious?

I caught my husband making love with a another woman —Woman