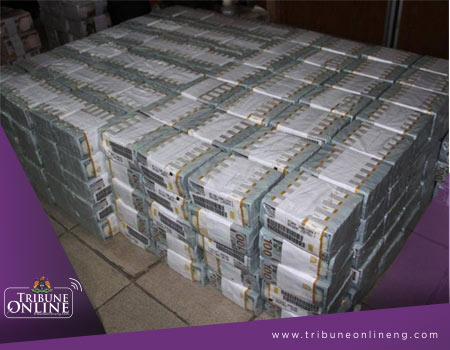 The House of Representatives on Wednesday mandated its Committee on National Intelligence to investigate the source of the N13 billion discovered in a residential apartment at Osborne Road, Ikoyi, Lagos.

The House also mandated the committee to ascertain the owner of the money discovered by the Economic and Financial Crimes Commission (EFCC).

The resolution followed the adoption of a motion sponsored by Rep. Gabriel Kolawole.

Moving the motion, Kolawole said the call to unravel the true identity of the owner of the money was based on claims and counter claims as to the true ownership of the funds.

He said that the development was having negative effects on the anti-corruption drive of the Federal Government.

“There is need for thorough investigation into the matter in order to ascertain the source of the money given the claims on its ownership, purpose and the damaging effects it is having on Federal Government’s anti-corruption drive,’’ Kolawole said.

The Director-General of National Intelligence Agency (NIA) Amb. Ayodele Oke had claimed that the money belongs to the agency and was approved by the previous administration for covert operation.

In a new twist, Gov Nyesom Wike declared that the money found in the Ikoyi apartment belonged to the Rivers state government.

Wike told newsmen that investigations by the Rivers State Government revealed that the money was proceeds from the sale of gas turbines by the immediate past governor of the state, Mr Rotimi Amaechi.