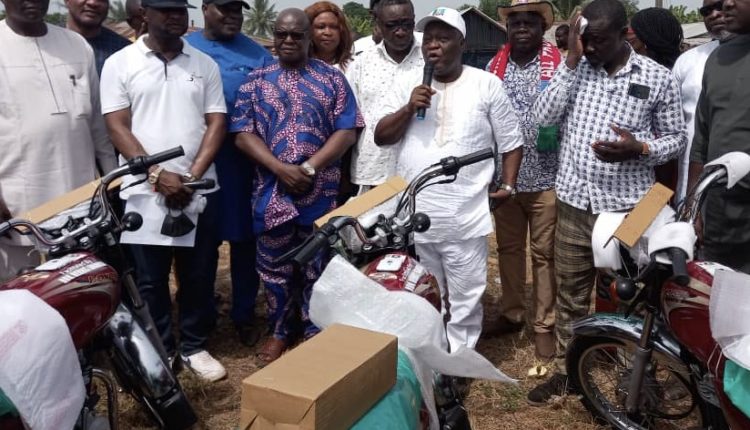 Idahisa issued the warning on Saturday, when he distributed motorcycles to 160 women and youths as empowerment at Iguobazuwa, near Benin in Ovia South West Local Government Area of the state.

Idahosa said that the standard that had been set in the constituency was such that the people would no longer tolerate a none performer.

The federal legislator, who is the Chairman of House of Representatives Committee on Legislative Compliance, noted that aside the empowerment, he has over 54 completed and ongoing projects across the 23 wards that made up the federal constituency.

“Ovia has seen the light; gone are the days when you turn what is meant for the people to yourself.

“By the time we are done, whoever that will come must perform or they will be stoned,” he warned.

A member elect of the State House of Assembly, Mr Sunday Aghedo, said he was never in doubt that Idahosa would be an effective representative of Ovia federal constituency.

“There have been others before him, but they failed to do what Idahosa is doing now. He has set a standard that those coming after him will strive hard to achieve.

“What he is doing today is unprecedented in the history of Ovia federal constituency,” he stated.

On his part, the State Secretary of the All Progressives Congress (APC), Mr Lawrence Okah, urged the beneficiaries on maintenance of the motorcycles.

“These motorcycles is to enable you all to work and take care of your families,” he said.

Wizkid, Tems, others to perform at 2021 Livespot X Festival

Woman who lost 4 kids to bandits’ attack in Sokoto, dies in hospital

FRSC gets 45 reflective jackets in Oyo