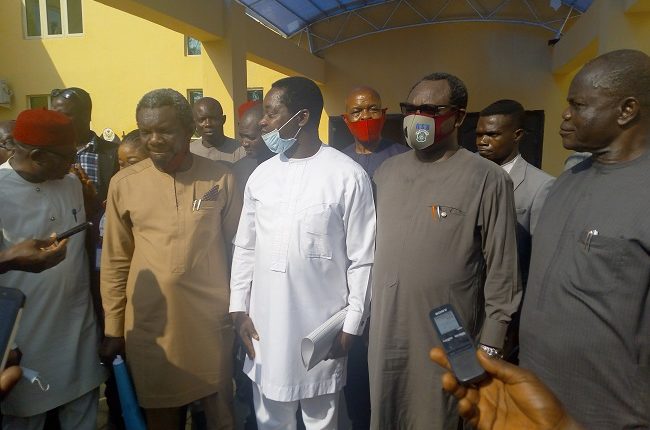 The committee gave the order during its oversight function at the commission on Monday in Abakaliki, Ebonyi State.

The committee which frowned that the chairman abandoned them without documents of work done with UBEB funds released to Ebonyi State, moved a motion inviting the chairman to Abuja and the suspension of the release of subsequent funds to the commission until the already provided funds were properly accounted for.

The motion was moved by Hon. Princess Miriam Onuoha and was seconded by Hon. Uzoma Nkem.

She said: “Having exhausted all efforts to reach the Chairman UBEB, Ebonyi State, who absconded, having had full knowledge of our visit, I move a motion that the chairman having failed to appear before the South East committee on public account to give us state of affairs and accountability of how the Federal Government appropriation through UBEC appropriated and sent to SUBEB Enugu, Ebonyi, have been implemented.”

However, South-East Coordinator, House of Representatives Adhoc Committee on Public Account, Hon. Chinedu Ogah commended Governor David Umahi for paying the counterpart funds for all the projects but regretted the attitude of some appointees of the governor in handling projects in the state.

“It is unfair that most of the staff appointed by the governor are not doing what is right. They have to build on what the governor has done to deliver services to the masses and there is a letter to the chairman of UBEC from the committee on the public account.

“We are here to see whether the money that was released is really channelled to the purpose for which it was released because a lot is ongoing and the federal government has done marvellously well under President Buhari and that is why we have a reputable National Assembly members in the committee.

“We met and spoke with the chairman of the commission this morning but he abandoned us in the office. We are unable to see anything and that is why the house moved a motion inviting him to submit all the documents because they cannot subvert the good gesture of the president and the governor.”

The committee also visited the Ebonyi State University, Abakaliki, to supervise the ongoing Tertiary Education Trust Fund (TETFund) projects in the institution where it expressed dissatisfaction at the attitude of the desk officer who could not give an account of how projects are being executed in the institution.

When the committee members visited the Ministry of Human Capital Development and Monitoring, the commissioner-in-charge, Mrs Ann Anigwe lamented the non-participation of Ebonyi in the Conditional Cash Transfer, Graduate Economic Empowerment Program (GEEP), among other Social Investment Programmes of the Federal Government.

Meanwhile, the committee commended Ebonyi College of Education, Ikwo, and expressed satisfaction with the institution.