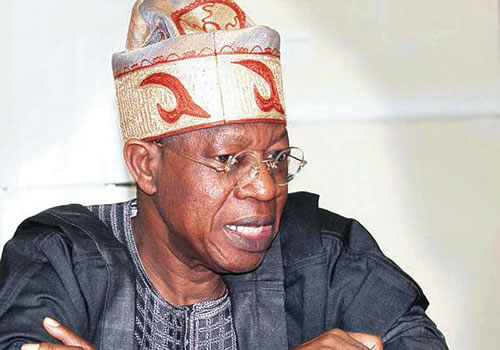 Minister of Information and Culture, Alhaji Lai Mohammed, has said that a repeal of the Enabling Act of Nigeria Liquefied Natural Gas Ltd (NLNG) will curtail foreign investment into the country.

He stated this on Monday in Abuja when the management of NLNG led by its Managing Director, Mr Tony Attah, visited him.

The minister was reacting to an issue raised by the management of the company that there was a proposal before the House of Representatives seeking the repeal of NLNG Act.

“It is very sad for me to hear that attempt is being made to stop the operations of the NLNG.

“It will mean that we are not only killing the goose that lay the golden eggs, but we will be sending a negative signal to the investing world.

“One thing investors like most is predictability. When we keep changing the goal posts, we are not going to attract investors.

“We should not think that what we are doing will affect only the NLNG, because big investors are in the same pool and they are so interconnected.

“If you take a decision that will affect anyone of them, it will have multiplier effect on others,” he said.

Mohammed said that the National Assembly was a patriotic organ and that he was sure that it would not take any step that would affect the flow of foreign investment into the country.

“I am sure we have a very patriotic National Assembly and I have full confidence that they will not do anything knowingly that will lead to capital flight or mass disinvestment in Nigeria.”

He advised the management of NLNG to approach the leadership of the national assembly and the Federal Executive Council as well as embark on serious advocacy on the issue.

The minister commended the company for its uniqueness in contributing to the economy and for being a shining example of success in Public-Private-Partnership.

He hailed the company’s approach to development of its host communities, investment in education sector, and in particular, sponsorship of a prize in Literature.

He solicited the partnership of the company in the execution of the “Change Begins with Me’’ campaign of the Federal Government.

According to Mohammed, the campaign to be launched by President Muhammadu Buhari is a national advocacy against indiscipline and a push towards a revival of eroding cultural ideals and values.

Earlier, Attah said that the legislature had taken steps to repeal the NLNG Act which was the foundation of the company as an entity.

“I can say without contradiction that they have taken steps to repeal the Act which enables investments into the company and takes more than 30 years to come into fruition.

“There are guarantees and assurances which are given within the Act which are expected to be sacrosanct.

“We see the attempt by the legislature to repeal this Act as something that will be very detrimental to the company and more importantly, to the country.

“First and foremost, we think we will, as a country, be faced with litigations which is a risk and which will put our reputation negatively in the investment world.

“We also see potential capital flight worth billions of dollar and a loss of more than 18,000 jobs both in the upstream and other side of the business,” he said.

Attah urged the minister to use his office to wade into the matter to forestall all the disadvantages it would pose to the nation.