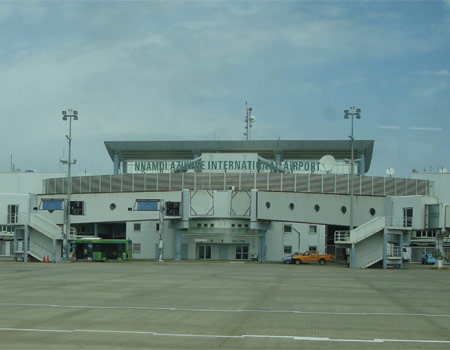 A NAN correspondent who visited the airport reports that the contractor, Julius Berger Plc, has commenced the work at the site.

The report said that the airport runway was cleared of unwanted equipment and aircrafts while Julius Berger vehicles were seen moving construction equipment to the site on Thursday.

Mrs Hajara Musa, the Manager, International Terminal, told NAN that the Federal Airport Authority of Nigeria (FAAN) had handed over the runway to the contractor.

Musa disclosed that the company had already done the marking to clearly indicate the runway had been closed to landing.

According to her, FAAN management has handed over the airport runway rehabilitation to Julius Berger Plc, which is on the ground carrying materials from one place to the other.

On the movement of passengers to Kaduna, Musa said that the management was alive to its responsibility by putting measures in place to achieve the desired result.

She said that FAAN had been able to identify some of its shortcomings and had started working to improve on them.

“No matter the plan that is being put in place you have to practicalise before you know its shortcomings and we are just starting and gradually there will be more improvement.

“We have made arrangement for the signage that will direct the passengers to the entry points where they should be.

“We have more than 10 buses as five have left for Kaduna, these will convey passengers back to Abuja if they so wish.

“We have successfully loaded four buses as at 10 a.m today and as more passengers are coming, they will be screened and subsequently transported to Kaduna,’’ she said.

Salami said that there was a synergy between the GAT, the domestic and international terminals on the arrangement for the transportation of passengers to Kaduna airport.

She said that the GAT was purely for chattered flights which had an average of 50 to 60 flights per day.

According to her, all the airlines operating chartered flight here have equally moved to Kaduna and that is why the apron is empty now.

A Benin-bound passenger, Mr Johnson Erijo, and member of the Delta House of Assembly, commended the Federal Government for the arrangement it had put in place to transport passengers to Kaduna.

Erijo told NAN that he did not pay any additional fee other than the money he paid for his ticket.

“The arrangement for now is perfect though I don’t know what it will become later, but what I’m experiencing the operation is seamless and working fine,’’ he said.

Prof. Ladipo Dolapo, said the screening of passengers in Abuja airport was necessary for the purpose of safety of passengers, adding that there might be no need for another screening at Kaduna.

Dolapo stated that even though the journey to Kaduna before taking flight to Ibadan could be stressful, he still preferred to travel by air because of bad road.

According to him, “the screening of passengers is also okay by me as that is for our safety because we need to be conscious of safety procedures’’.

“However, I hope the journey from here to Kaduna goes well as I’m told that the buses are equipped with security personnel for safety of passengers.

“The journey looks stressful because this morning I thought of taking taxi cab to Ibadan from Abuja, which takes about nine hours.

“The roads are indeed bad, it is my prayer that government improves these roads, because the roads are bad, but nevertheless we take as it comes,’’ the don said.

NAN recalls that the Federal Government on Wednesday closed down the airport temporarily for six weeks to allow a seamless repair of the runways after more than 20 years of construction. (NAN)

Audio: President Buhari thanks Nigerians, pledges to rededicate self to protect their interests

BREAKING: 160 Nigerians arrive Abuja from US