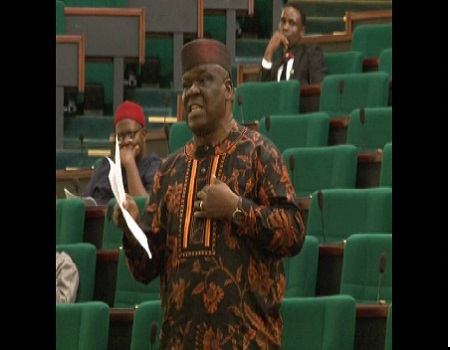 Rep. Jerry Alagbaoso, Chairman, House Committee on Public Petitions has urged youths to leverage on the Not-Too-Young-To-Run Act to be part of the decision-making process in Nigeria.

Alagbaoso made the call at the induction of the Policy and Legal Advocacy Centre (PLAC) 2019 Legislative Internship Programme with support from the European Union (EU) on Wednesday.

He said early involvement of youths in the electoral process would make them active citizens and voters who would confront anti-democratic tendencies in governance.

“To avoid political misunderstandings and demonstrations, youths should be allowed to become part of the decision-making processes in Nigeria.
“Given our youthful population and considering the many socio-economic and political challenges faced by our youths, it will be better to have more
youthful leaders in sync with the Not-Too-Young-To-Run Act.

“However, there seem to be a palpable fear that the Act may not achieve much if the government is unwilling to undertake serious electoral reforms in order to check electoral irregularities.

“Nevertheless, all hope is not lost as regards electoral reforms being sought by the National Assembly which has been promised by the Buhari administration,’’ he said.

Olagbaoso urged youths to continue to push for greater roles in governance and also prove that they could be responsible citizens if accommodated by adults in political positions.

Sani-Omolori advised the interns to bear in mind that they represent the youth of Nigeria, therefore they should utilise the platform to prepare themselves for politics.

He said that the management of the National Assembly was concerned with improving the legislature by encouraging youths to observe parliamentary business at the plenary and the committee sessions.

Earlier, Ambassador Ketil Karlsen, Head of Delegation, EU in Nigeria and ECOWAS, said the internship programme was a demonstration of Nigeria’s commitment to inclusive governance by bringing-in the youth.

Karlsen who was represented by Mr Clement Boutillier, Head of Section, Democracy, Governance and Migration, said the EU was a major political partner of Nigeria and an advocate of youths’ political participation.

He said that the EU had been interested in strengthening and deepening Nigeria’s democracy since 1999 and had spent over 100 million Euros to that effect.

He said the EU decided to support the programme because it believed that the proper function of the legislature would make room for stability, economic development and progressive democracy.

The Executive Director of PLAC, Mr Clement Nwankwo, in his remarks, said that the centre, with support from EU, organised a 10-week legislative internship programme for more than 35 youths selected across the 36 states.

Nwankwo said the programme was designed to provide a platform for young professionals to develop their skills while serving with legislative offices in the National Assembly.

He said that it was aimed at providing the opportunity for youths to gain first-hand knowledge of the workings of the legislature and to create an opportunity to increase citizens’ participation in governance.