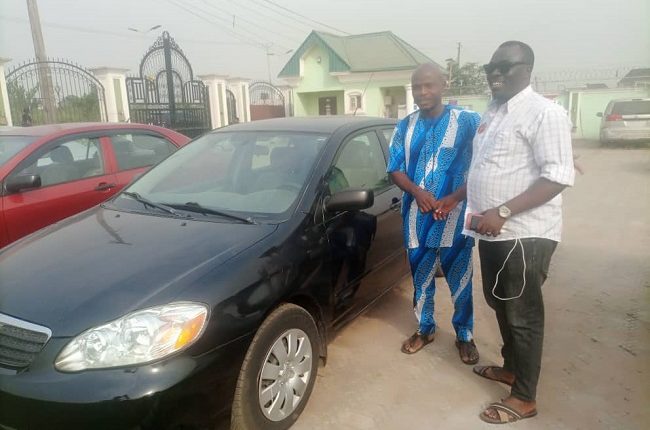 The member of the House of Representatives, representing Ovia Federal Constituency, Mr Dennis Idahosa, harped on massive youth employment as a panacea to youth restiveness and acts capable of undermining the laws of the country.

Idahosa, therefore, called on government at all levels to make youth employment their priority to stem the tide of lawlessness among the young folks in the country.

Idahosa made the call, on Wednesday, when he presented car gifts (Toyota Corolla) to selected youths from his constituency.

The federal lawmaker urged the beneficiaries to deploy the vehicles for commercial purposes to reduce the level of unemployment in the area.

Among the beneficiaries was his media aide, Friday Aghedo.

Speaking while presenting the cars, Idahosa said: “This is one of my commitments to the people of Ovia. There is a lot of unemployment rate in my constituency and the country and the only way I can start reducing it is to get the youths involved in private business.

“I have got this for Ovia youths so that they will be able to go into transportation business and be able to sustain their families and I hope to increase the number as the year progresses.

“We have a lot of plans for them and this is one of them. The youths are critical stakeholders in the country because in terms of demographics, they are about 70 per cent of the population if not more so we must continue to engage them and I have been pursuing this since I came into office about two years ago.

“That is why we have been providing educational facilities for Ovia youths especially primary and secondary schools and we have built at least 30 schools so far.

“With these numbers, we will continue to do more and if I am encouraged by what these beneficiaries will do, I will be encouraged to do more for others.

“There are no conditions attached apart from giving glory and honour to God almighty, it is for them 100 per cent. This is not from any budgetary provision; it is my personal resources that I used to honour some youths.

Responding on behalf of the beneficiaries, Aghedo said: “I am grateful to God for this new year and what He has used my boss to do for me. It is like telling me to do it and I tell him that our loyalty is 100 per cent and we will continue to do our best to make sure he succeeds.”

Idahosa’s Legislative Assistant, Charles Orosanye, who physically presented the car keys to the beneficiaries, said that the gesture was a fulfilment of the lawmaker’s electioneering campaign “because he promised to make Ovia people masters of themselves.”

Verdict: The claim is false. The content of the article published by these online platforms is not new; it has been recirculated several times and has been debunked.Rep member harps on youth employment, gives cars to constituents