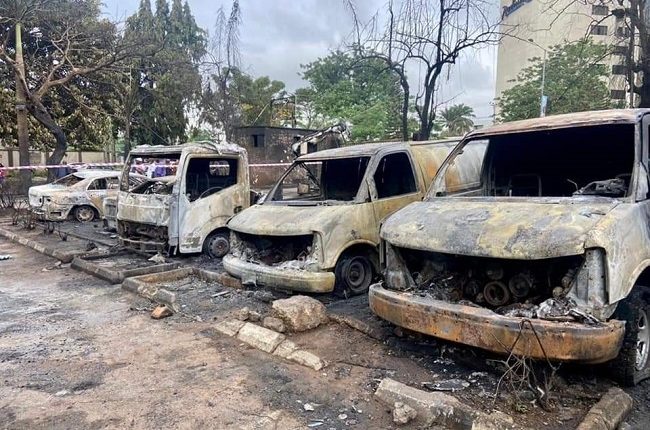 Prominent among the dead reportedly was a top official of the Association of Town Planning Consultants of Nigeria (ATOPCON).

The gas tanker explosion, which occurred late Thursday, also damaged the ground floor of OPIC Plaza that houses a Chinese restaurant and left 13 persons with varying degrees of burns.

The video of a sister of one of the victims went viral with her, amid tears, saying : “Why? Why? Help me to wake my brother up o. Help me to wake him up. The boy had four children — small, small boys. We don’t have parents; we are orphans. Oh God! Why?”

One of the dead is also said to be an indigene of Ife North Local Government Area of Osun State who was unfortunate to be driving along that area when the tragedy struck.

A relative of the deceased told Saturday Tribune that “he struggled to get out of the vehicle but was badly burnt.”

He reportedly died in the hospital.

A source at the Nigerian Institute of Town Planners (NITP) told Saturday Tribune that the ATOPCON top official had his office in the plaza but had gone to eat at the Chinese restaurant when the explosion occurred. Another source confirmed that the official died in the explosion. Twenty-five vehicles parked on the premises were also burnt. The injured persons were taken to the nearest hospitals for treatment.

Explaining how the tragedy happened, the Director General of the Lagos State Emergency Management Agency (LASEMA), Dr Olufemi Oke-Osanyintolu, said that pressurized gas that escaped from the fully loaded gas tanker discharged into the atmosphere and spread in all directions, especially to that of OPIC, where it ignited and devastated at an eatery housed in the building’s ground floor.

The resultant fire, according to him, led to the blowback that razed 22 of the vehicles parked within the OPIC premises, beside Opebi Sheraton Hotels and Towers, trapping its occupants and leaving the OPIC plaza extensively damaged.

He said LASEMA , in an overnight operation, concluded a recover y operation that commenced when the gas tanker exploded on Thursday night.

“LASEMA and its collaborators successfully extinguished the resultant fire from the gas tanker which broke out at Maryland at the front of Sheraton Hotels and Towers when a loaded gas tanker with unknown registration exploded on motion while traveling inwards Ikeja,” he said. However, Oke-Osanyintolu said the agency’s paramedics administered pre-hospital treatment to numerous victims that sustained varying degrees of burns before they were taken to the Gbagada Burns Unit, LASUTH and General Hospitals nearest to the scene for further treatment. “The agency’s heavy-duty equipment, Goliath-the-giant forklift and a flat-body truck were deployed to recover carcass of the burnt gas tanker, while dampening down operation continued for hours after,” the LASEMA boss added.

LASEMA’s spokesman, Nosa Okunbor, said the extinguishment of the fire, through the collaboration of the agency’s response teams, fire unit, the Lagos State Fire and Safety Service and the Nigeria Police, was coordinated by the LASEMA boss.

The affected OPIC Plaza building has been cordoned off. Lagos State’s Commissioner for Special Duties, Mr Martins Bamigboye, who led other state officials to the scene, explained that the incident occurred as a result of the truck’s breakdown with leaking cylinder whose gas spread to the generator house and gas cylinder of the Chinese restaurant, resulting in a spark.

61 years after independence, Nigerians poorer now than ever