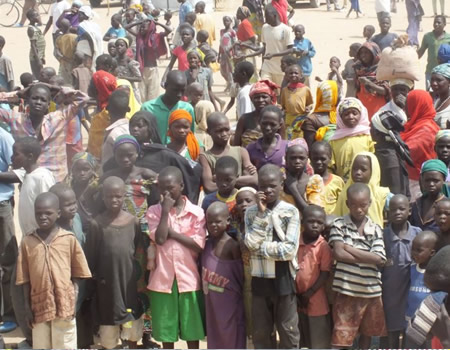 Federal Commissioner of NCFRMI, Senator Basheer Mohammed, during the flag-off of the distribution of the items in Kuta, headquarters of Shiroro Local Government Area of the state on Thursday, said that the items were for the Internally Displaced Persons (IDPs) in Shiroro and Munya camps.

Mohammed, who was presented by the Director, Human Resources, Mr Abdulraman Wachiko said the relief package was food and non-food items meant to alleviate the sufferings of the IDPs.

“The Federal Government under the leadership of President Muhammadu Buhari has demonstrated great concern for the welfare of displaced persons in the country,” he said.

He disclosed that the commission had also commenced the construction of massive housing units to resettle displaced persons under a project tagged “IDPs Resettlement cities.”

Mohammed noted that the project consists of 600 units of two-bedroom bungalows each in the selected state, adding that the houses would be furnished and equipped with facilities for education, skills acquisition and farmlands.

He added that the commission with support from the Central Bank of Nigeria had commenced another programme tagged “Project Reliance” aimed at providing IDPs with vocational skills for means of livelihoods.

In his remark, the Chairman of Shiroro Local Government Council, Comrade Suleiman Dauda Chukuba, lauded the efforts of the commission for the gesture, saying “the local government alone does not have the capacity to cater for the number of IDPs displaced from eight wards of the local government.

Also, the Director-General of the State Emergency Management Agency (NSEMA), Alhaji Ahmed Ibrahim Inga said the agency would ensure the items get to the actual victims.

Inga, who was represented by the Public Relations Officer of the agency, Mallam Hussein Ibrahim said NASEMA would use its structure in each camp such as committee headed by local government officials and community heads for distribution.

One of the victims, Rifkatu Shedrick, appreciated the gesture from the Federal Government, saying it would go a long in reducing their sufferings.

Another victim, Mohammed Bawa, called on the government to intensify efforts in tackling security challenges in the area to enable displaced persons return to their communities to continue with their farming activities.