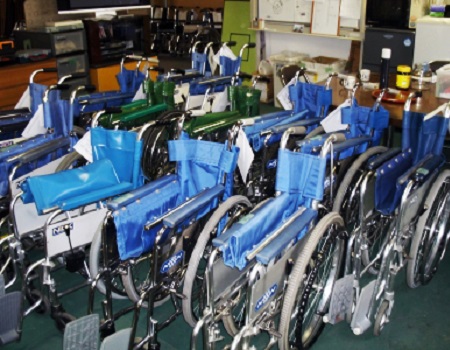 THE Nigerian Red Cross Society (NRCS), Anambra state chapter has distributed about 24 wheelchairs to some disabled persons in the state, as part of its Corporate Social Responsibilities, CSR.

Distributing the wheelchairs to the beneficiaries, the out-going state chairman of NRCS, Justice Paul Obidigwe (retd), said the gesture was in furtherance of its articulate, integrated and consolidated field actions, as well as rapid response to emergency situations and humanitarian compassion.

Obidigwe who was a former Chief Judge of Anambra state noted that cataloguing the activities of NRCS here in the state would not be actualized because the activities of the state latent society are too numerous and too voluminous to be fully catalogued within its four years action-packed activities.

Also speaking, the state Vice-Chairman of the society, Prof Peter Emeka Katchy disclosed that NRCS would procure more wheelchairs for the vulnerable as according to him, they have just discovered that the chairs could not go round the needy.

Some of the beneficiaries commended the NRCS for its prompt and quality services to the vulnerable and prayed God to reward them abundantly.

Tribune Online gathered that the distribution exercise which was part of activities marking their 28th Central Council/Annual General Meeting, AGM with a theme: “forward march to next level of humanity”, was witnessed by the traditional ruler of Nnewi, Igwe Kenneth Orizu and representatives of the police, Immigration, Prisons, fire service and other paramilitary organizations in the state.

The NRCS also conducted an election during which Prof. Peter Emeka Katchy, Vice-Chairman of Red Cross in the state was elected as the new state chairman, while His Lordship, Magistrate Rita Nzekwu emerged as the state Vice-Chairman, among other executive members.

In his post-election speech, shortly after the new executive members were sworn in by the outgoing state chairman, Justice Obidigwe, the newly elected chairman, Prof. Katchy appointed Obidigwe as a life member of the state Red Cross.

Katchy disclosed that his administration would embark on a number of outstanding projects for the Red Cross and increase the tempo of its rapid response to flood, fire and accident disasters which had always become a recurring decimal in the history of Anambra state in particular and Nigeria in general.

In a spontaneous response, Obidigwe said he was accepting the appointment based on his mutual love for the Red Cross  and its activities as it concerns assistance to humanity and he commended them for the high level of cooperation they accorded him during his tenure as the state chairman and urged them to replicate the same level of cooperation to the new executive.