Razzmatazz
By Segun Adebayo and Kola Muhammed On Jun 13, 2021 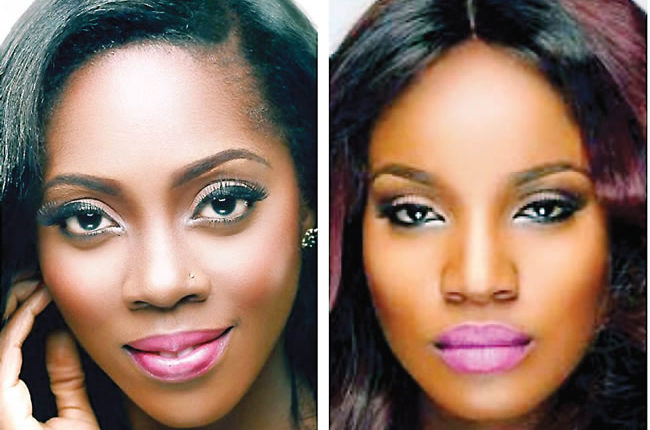 The between popular female music stars, Tiwa Savage and Seyi Shay was undoubtedly one of the talks of the past week with the pair filmed at a salon in Lagos State.

Speculations have been thrown up as to what could have been the genesis of the age-long friction between the two Afrobeats stars as many have scrambled to pinpoint the real reason.

Findings by R, however, have revealed that the dispute between Seyi Shay and Tiwa Savage can be traced to the former’s emergence as a formidable rival to the throne of the queen of Afrobeats.

Apart from Seyi Shay, stars such as Yemi Alade and Simi have also attained prominence in the industry with Alade giving herself the moniker, Mama Africa, leaving Tiwa’s supposed reputation as the queen of Afrobeats challengeable.

Beyond the battle of dominance that seems to be tearing the female folks apart, Tiwa and Shay have never featured each other on any track as none of them was ready to reach out to each other first.

A source who didn’t mention her name informed R that the two superstars have not told the public what led to their fight, but some know that they are bitter against each other over ambassadorial deals and alleged Savage’s romance with Wizkid.

It was gathered that Shay has always been close to Wizkid but things took a new turn the moment Tiwa started getting into the picture and this development didn’t go down well with both parties as one had to leave the space for the other.

It will be recalled that during the fight at the salon, Savage asked Shay why she was going about rubbishing her name, adding that she didn’t take her man neither did she take her shows. But our source said there was more to Tiwa’s utterance at the salon.

The duo have been at loggerheads over the years as no one could tell what could have led to the cold war that has kept them from seeing each other or working together on any musical project.

In a video that has since gone viral on social media platforms, especially Instagram, it was learnt that trouble started when both artistes met at a salon and engaged in what would have resulted in a brawl had they not been pulled apart.

Savage alleged that Seyi Shay and another female rapper dissed her in their separate cover to one of Kizz Daniel’s song in 2019.

Livid Tiwa had said she would not respond to either Seyi or Kimani even if they had attempted to drag her name through the mud with the songs they released on social media platforms two years back.

The heated argument between Tiwa and Shay took a turn for the worse as they both moved towards each other menacingly but those who were at the scene were quick to get in between them to calm frayed nerves.

Savage who said she would not have anything to do with Seyi Shay during the shouting session said “Don’t come to me to think you can say hi with the dirty and disgusting spirit that you have. You think I have forgotten what you guys did? How many years ago? You and Victoria Kimani. You think I can forget?

Seyi Shay who tried to explain to Savage said she didn’t expect Savage to react to her gesture in such a manner: “The only reason I greeted you is to try and squash all that is going on and to say sorry. I am not going to listen to this because you got your facts wrong.”

In her response, Savage said: “You said bad things about me during your interviews and did a whole song to shade me but I didn’t say anything. I have never slept with your man and never taken your job. I have never gone on the radio to say shit. You don’t just come to me and say hi to take all of that away. If I have an issue, I don’t just walk up to you and say hi. No,” she had said.

Although my major financier died early, I still succeeded in life —Agbalajobi

Special usage of ‘do’