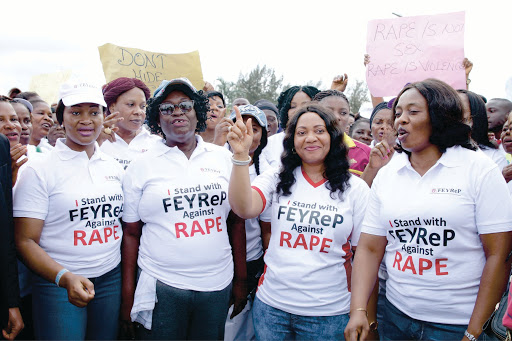 Worried by the rising cases of rape including defiling of minor girls, the first lady of Akwa Ibom State, Dr. Martha Udom Emmanuel, has joined aggrieved women drawn from different parts of the state, in a street protest.

The women, who marched through the major streets of Uyo, the state capital including the popular Ibom Plaza, were armed with placards of various inscriptions: “Say no to rape”; “Rape is evil”; “No bail for rapist” amongst others.

A communiqué endorsed by Mrs. Emmanuel on behalf of the women, condemned incessant cases of rape and gender-based violence since the start of Coronavirus (COVID-19) lockdown on March 30, 2020, in Akwa Ibom.

According to her, no fewer than 58 cases of rape had so far been reported in the state with most of the victims below age 16, warning that if such trend was allowed to continue, the future of young girls would be jeopardised.

More worrisome to her, the communiqué noted “is the fact that their fathers, uncles, grandfathers, care-givers, intimate partners and other close associates perpetrate a quarter of these cases.

“The women having taken cognizance of the above facts, have come together to say: enough is enough.”

They, therefore, impressed it on the government to declare state of emergency on rape and gender-based violence, adding that stiffer measures including refusal of bail to offenders should be put in place as effective deterrence to would-be-offenders.

Besides, the women called for the establishment of sexual referral centres across the state’s three senatorial districts of Uyo, Eket and Ikot Ekpene, with a view to addressing sex offenders and cushion the trauma of the victims.

A holistic action plan against the menace should be in place with security agencies, state and non-state actors, medical workers and other relevant stakeholders, the women advocated..