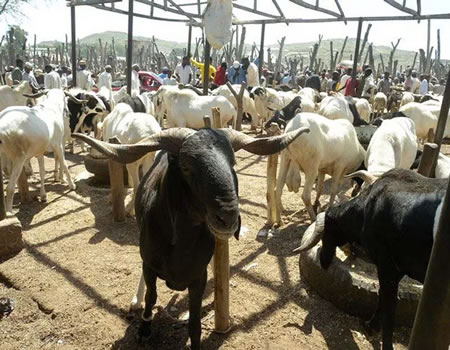 Less than five days to the celebration of Eid-el-Kabir, ram sellers within Ibadan metropolis are complaining about low patronage.

A visit by a correspondent of the News Agency of Nigeria (NAN) to major ram markets in the metropolis on Wednesday showed that there were few buyers in the markets.

Some major ram markets visited by NAN include Bodija, Liberty Road and Iyaganku.

NAN reports that most buyers that came to the markets complained about the scarcity of fund to buy the rams.

A Ram Seller, Malam Ibrahim Yobe, said that he was able to bring more rams to Oyo State this year compared to the year 2018, saying that rams were largely available but low patronage.

He, however, complained about bad roads which made the journey difficult and called on the government to make road construction a priority.

Alhaji Sikiru Ibikunle, another ram seller, said the cost of feeding the rams contributed to the high price.

Ibikunle said that most ram sellers obtained loan from banks, which must be paid with interest.

He said that the low patronage was a big concern for them because the banks that gave them the loan would not listen to their complaints.

Also speaking with NAN, Mr Rabiu Atanda, a Civil Servant in Oyo State, said that the prices of rams were on the high side.

Atanda said that he needed money to buy the ram because he had spent his July salary.