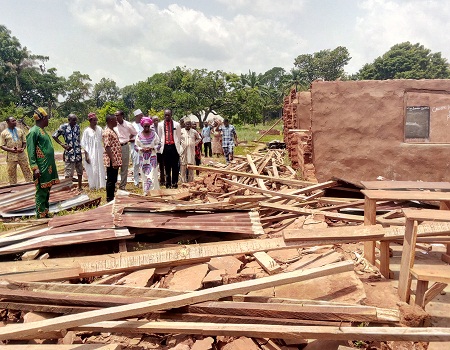 During an on-the-spot assessment visit by the state’s Commissioner for Education, Science and Technology, Mrs Rosemary Osikoya, the principal of the school, Mr James Ameh, said the incident occurred on March 22.

Ameh said that school resumed in the morning of Friday, March 22, and met the disaster.

“We were told by the security men on duty that it was the heavy rain with a devastating windstorm that blew up the roof and brought down the buildings.

“’You can see the level of destruction caused by the windstorm. The rubble you are seeing on the ground were blocks of four classrooms, and the school’s Administrative Block.

“We are helpless, and that is why we have cried out to the state government through the ministry of education to come to our rescue.

“Though we are pulling resources together to see how we can secure a place where students can write the WAEC Examination, which is fast approaching,” Ameh said.

The Emagaba community Leader, Mr James Onoja, said that since the incident occurred, they had been making efforts to cushion the effects on the students.

“With the commissioner’s visit today, we believe that something would be done to help the school. We thank the government for the immediate action,’’ Onoja said.

In her response, Osikoya said she was saddened that a school that was serving more than six major communities was destroyed by a rainstorm.

She said that the state government, aware of the needs in the education sector, had made provisions to strengthen infrastructure in public schools in the 2019 budget for the ministry.

“But beyond waiting for the budgetary provision, WAEC examinations are starting soon, which means about eight communities will be completely cut off except there is urgent action.

“We had discussions with government officials from Ogugu, which include the Chief of Staff to the governor, Mr Edward Onoja, and we are scaling up support for immediate action to restore the building.’’

She said that the ministry was also collaborating with the Bureau for Lands and Urban Development, in partnership with the ministry’s project officer, adding that a detailed assessment was conducted on Thursday.

“We have studied the quality of buildings and whatever is being done now is just an emergency measure to salvage the current situation.

“Our goal as a government is to ensure that when this kind of incident happens, we are able to do something within the lean resources we have.

“The priority and target now is to make the school functional so that the final year students who have already registered for WAEC, can sit for the examination.’’

Death of school boy : Police to declare teacher wanted if …