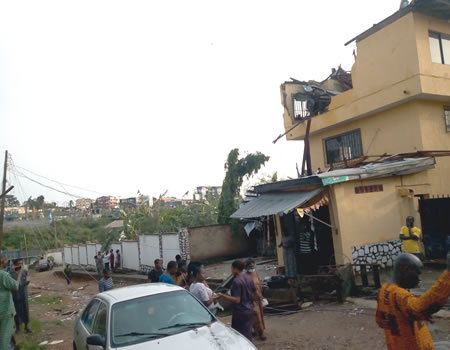 Residents of Joyce B area of Ibadan were left to lament their losses after a 45-minute rain on Saturday wreaked havoc on the area.

The rain which started around 4:15 pm damaged some residential buildings in the area.

According to one of the victims, Mrs Mariam Adebayo, the strong wind that gave force to the rain started blowing 15 minutes after the downpour had commenced.

“The rain  began around 4:15 pm, I was in my room while it rained, but suddenly I heard a loud sound in the compound. That was when I realized that the breeze had brought a big wood and it destroyed the roof of the house immediately,” Mrs Adebayo said.

Another resident of the area, Muraina Olayinka, said the rain caused a lot of damage in his compound.

“The breeze started 15 minutes after the rain had started. While it lasted, it removed the roof of my apartment and we had to move our things out of the house.

Mrs Toyin Alabi, a landlady in the  area lamented that the rain destroyed the roof she had just repaired. Given the current situation in the country, she said she was hopeless as how she would get the roof repaired very soon.