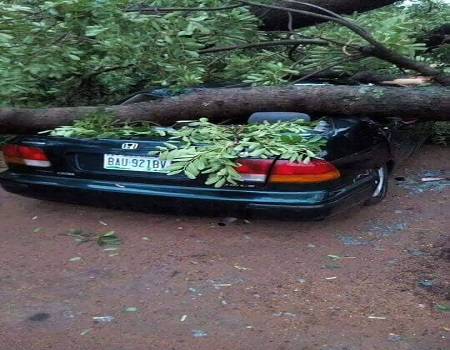 ABOUT 10 lives were lost while properties worth millions of Naira were lost Saturday evening following rainstorm with the whirlwind that ravaged Bauchi metropolis and environs.

The whirlwind that preceded the rain started at about 4 pm Saturday when residents were getting set to go out to continue with the celebration of the Eid-al Fitri Sallah.

Our correspondent who went round Bauchi metropolis after the rain discovered that many houses were badly damaged while trees were uprooted and cars submerged by roofs blown off from the buildings.

Areas of the town that were worst hit are Gombe road, Kofar Dumi, Wuntin-Dada and Yelwa where buildings and other structures including schools were pulled down causing deaths and injuries to the people.

Some of the victims who managed to speak only expressed lamentation over the disaster calling on government and well-spirited individuals to immediately come to their aides in order to ameliorate the hardships the incidence has put them into.

As at the time of filing this report, the victims were still counting their loses while the exact number of death was yet to be confirmed due to the fact that people were still looking around for their relations particularly little children that ran out when the wind blew off the roofs of their houses.

Officials of the State Emergency Management Agency (SEMA) could not be reached immediately for reaction on the disaster due to the fact that most of them have travelled out of town for the Sallah celebrations.

Meanwhile, Wife of the Bauchi State Governor, Hajia Hadiza Abubakar, has sympathised with the people of the state particularly those directly affected by Saturday’s rainstorm, which wreaked havoc on parts of the state capital.

Hadiza Abubakar, according to a statement by her Press Secretary, Rashida Yusuf, described the incident, which resulted in loss of lives, the destruction of many homes, cars, farms, schools, and other public amenities in Bauchi as a natural disaster.

The Governor’s Wife, who said she received the news of the destruction with sadness, said that it was a clear case of a natural disaster, and therefore called on various government agencies and public-spirited individuals to help provide immediate relief to the affected communities.

She stressed the need for residents of the state capital and the state at large to be vigilant and conscious of the fact that the rainy season has just begun, adding that more attention should be geared towards adequate protection of lives and property in the neighbourhood.

Hadiza Abubakar, who called on members of the public to desist from dumping refuse and other irrelevant items that can hinder the easy passage of rainwater inside drainages, appealed to relevant government agencies to swing into action towards finding palliative measures to the affected victims.

Lagos to students: Stop discriminating against albinos in your midst