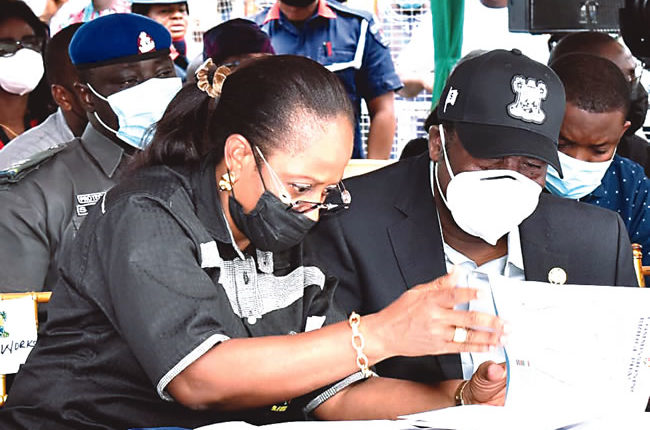 Deputy Governor of Lagos State, Dr. Obafemi Hamzat, has assured Lagosians that the blue line rail project would commence operation before the end of 2023.

Hamzat, who represented Governor Babajide Sanwo-Olu at the ceremony, said state government has been doing everything possible to ensure interconnectivity by developing effective transportation system comprising road, waterway and rail, to reduce suffering and man- hour loss to traffic jam in the state.

“Before the end of 2023,  Rail from Okoko  to Marina will move to safe man-hour that will be lost to traffic,” he said

He said Ira-Muwo-Tedi Bridge Phase 1, Sanwo-Olu said was conceived to open up the densely populated communities and also provide a functional bypass to the Lagos -Badagry expressway between Volks and Tradefair bus stop.

Sanwo-Olu said the construction of the bridge was one of the ways to redirect traffic off and to serve as alternative route to the gridlock on Lagos-Badagry Expressway.

He recalled that the first phase of the project was initially awarded to Messrs Moreno -Marinas -Lagoon in April 2008 but was terminated in December 2012 due to non-performance and poor workmanship which led to a functional failure.

According to him, the project was re-awarded to Messrs Lopek Construction Nigeria Limited for correction of the structural defects and execution of outstanding works comprising piles, pile caps, piers, longitudinal beams and deck slabs, pedestrian walkways, street light, Muwo T-junction with outfall drains.

He seized the occasion to flag-off the second phase of the project, including Tedi -Muwo road, leading to Abule Osun, adding that  his administration was also constructing Irede, Onile-Onirekero roads in the axis

“We are giving priority to roads leading to jetties,”the governor said.

He appealed to stakeholders in the communities to take ownership of the project by ensuring that they protect them.