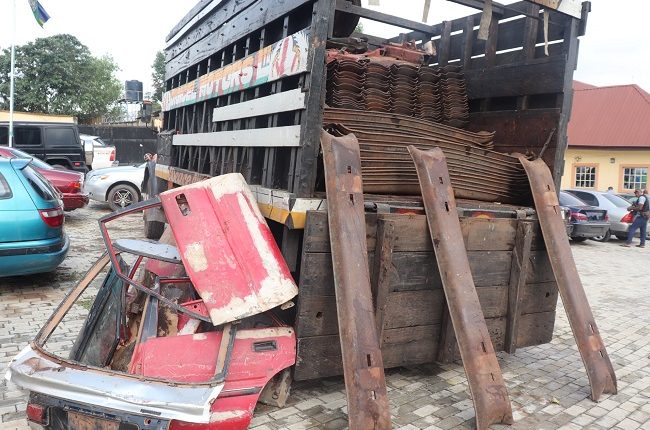 The Police High Command on Wednesday said that the operatives of the Force have arrested a criminal syndicate responsible for the recent vandalization of rail tracks in the North-West and North-Central parts of the country with a recovery of three Trucks load of vandalized tracks.

Addressing newsmen in Abuja on the development, the Force Public Relations Officer (FPRO), Frank Mba, a Commissioner of Police CP disclosed that the arrested vandals were among a total of 36 notorious criminal suspects arrested by the Police recently for offences of banditry, kidnapping, armed robbery, possession of illegal firearms, cultism, murder, economic sabotage, cybercrime, and car snatching amongst others.

He explained that the arrest of the suspects followed deliberate efforts by the Force to contain and clampdown on perpetrators of recent incidents of rail tracks vandalism, carting away of critical locomotive equipment and other related economic crimes in some parts of the country. 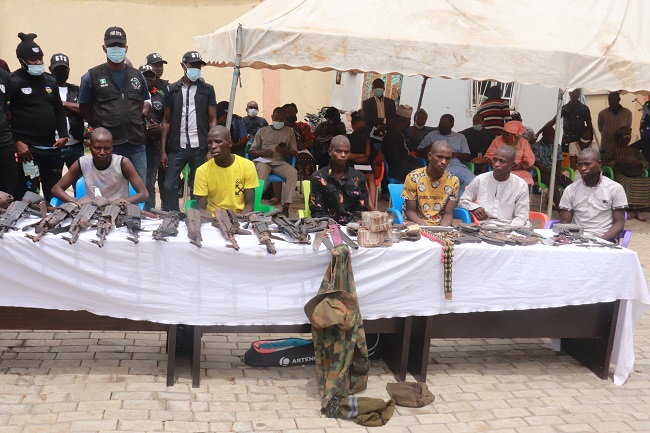 According to him, the arrests were achieved as a result of sustained nationwide tactical, anti-crime operations by the Police Intelligence Response Team (IRT) and the Special Tactical Squad (STS) in the ongoing efforts aimed at stemming criminal activities particularly violent crimes in the country.

He disclosed that the suspects involved in the rail track vandalism, Idris Lawal ‘m’ 42years, Abdullahi Musa ‘m’ 29years and Usman Umar ‘m’ 22years were arrested following a coordinated intelligence-driven special operation on 27th May this year which uncovered a warehouse in Gboko Local Government Area of Benue State.

According to him, “a cordon and search operation conducted by the Police operatives on the building revealed different vandalized rail equipment, stolen rail installation racks, weld-shear, rail puller, other rail accessories and consumables. 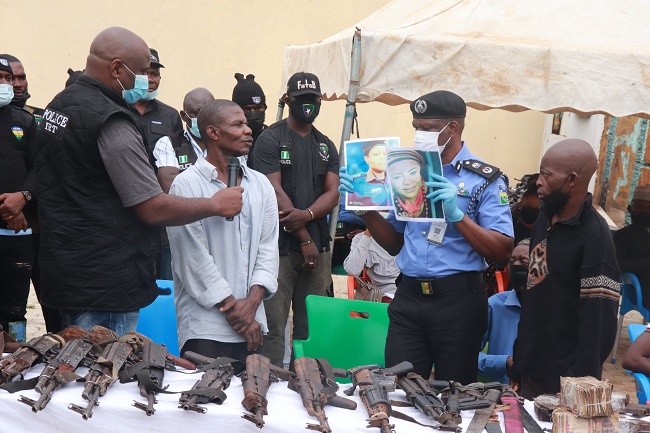 “Further investigations by the Police team led to the interception of 3 heavy-load trucks along Ikom-Ibom junction in Cross Rivers State, the Therucks were fully loaded with vandalized rail items transported from the warehouse.”

Mba further explained that in the same development, a 6-man notorious armed robbery and kidnapping syndicate linked to several violent crimes in Ondo and Ekiti axis of the South-Western part of the country had been arrested.

He explained that the arrest followed the trailing and arrest of one 60-year-old Umar Mohammed who had been on the wanted list of the Police for transporting firearms and ammunition on behalf of notorious criminals who have carried out major operations in the South-West States.

According to him, further investigations by the Police team led to the arrest of 5 of his gang members – Umar Abubakar, 22yrs, Muhammed Bello, 52yrs, Sale Lawali, 25yrs, Usman Muhammed, 20yrs and Musa Ibrahim, 53yrs, all male – that utilize the weapons he provided to carry out series of kidnapping and armed robbery operations in the country.”

The FPRO also paraded one Chris Akpan a 57 years old man and a resident of Akwa-Ibom who allegedly murdered one Miss Josephine Cynthia, 45 years he promised marriage and she was involved in a relationship with him before he murdered her before date of the marriage.

He said that between 19th and 20th December 2020 the suspect took the victim to Benue State and contacted a native doctor one Rafiu Afolabi who he agreed to pay the sum of N5m to kill her with his own gun.

According to him, in the course of their relationship she handed him over some huge sums of money and when he didn’t fulfil the marriage promise, he later lured her to the native doctor who later fired the gunshot that murdered the victim.

While parading the native doctor, he said that he fired the gunshot that killed the middle aged woman with his gun as he was promised N5m out of which he only received part payment of N50, 000 from the suspect after the shooting.

He also told newsmen that the operatives of the Intelligence Respond Team IRT of the IGP also arrested one Prince Ruben from Etche Local Government Area of Rivers State for the alleged murder of one Mrs Joy Saturday after he had sold a plot of land to the victim at N250,000 and killed her.

He further said that the suspect lured the victim to the bush for an inspection of the property and unknown her he had conspired with two men Wabba Promise and one Chinedu now at large to kill her.

He added that the crime suspects took the victim’s N20,000 and they gang raped her and pour acid on her corpse.

The Police image maker called on well meaning citizens of Rivers State to volunteer credible information that would help in tracking and arrest of the two remaining suspects for the murder.

He further said that the suspect introduced himself to them with the name through the media platform and oftentimes promised the victims mostly young girls and women $10,000 from their supposed clients mostly rich men.

The Police Spokesman consequent upon this act advised the members of the public especially young men and women to desist from wrong usage of the social media for online transactions.

While assuring that all the suspects would be soon arraigned in the court of law upon the conclusion of their investigations declared that the force would be more hard in dealing with crimes and criminal activities in the country.

In spite of the huge investment in the water sector by the government and international organisations, water scarcity has grown to become a perennial nightmare for residents of Abeokuta, the Ogun State capital. This report x-rays the lives and experiences of residents in getting clean, potable and affordable water amidst the surge of COVID-19 cases in the state…Rail track vandalism Rail track vandalism

The Lagos-Ibadan railway was inaugurated recently for a full paid operation by the Nigerian Railway Corporation after about a year of free test-run. Our reporter joined the train to and fro Lagos from Ibadan and tells his experience in this report…Rail track vandalism  Rail track vandalism