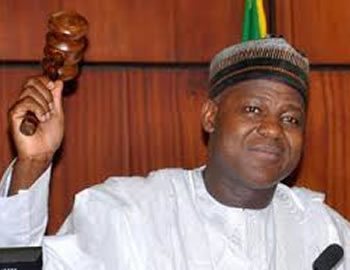 The Speaker, House of Representatives, Honourable Yakubu Dogara on Wednesday, hinted that the House was poised to amend the act setting up the State Security Service (SSS) in view of the recent invasion of some judges’ houses, by the operative of the secret police.

The Speaker dropped the hint while declaring open a two-day investigative hearing by the ad hoc committee set up to investigate all cases of invasion of property and arrest of persons for reasons outside the general duties of state security service, as prescribed by the National Security Agencies Act, 1986 since 29 May 2015.

The Speaker noted that, the activities of DSS was a duplication of the function of the Economic and Financial Crimes Commission(EFCC).

According to him, “It is untidy, it seems we have multiple agencies exercising similar functions. The EFCC already handles issues of corruption and economic crimes in Nigeria.

“The activities of the State Security Service of late have raised concerns in the Nigerian polity as to the propriety of the conduct of officials of the service and whether their actions are consistent with the law setting it up.

The chairman of the ad hoc committee, Honourable Garba Datti Muhammad on his part, said that, “the task of this committee is not an easy one and, therefore, we crave the support of everyone here present in order to come up with recommendations that will mean well for our country as well as stand the test of time.”

The Rivers State governor, Mr Nyesom Wike in his memorandum submitted to the committee through the state Attorney General and Commissioner  of Justice, Mr Emmanuel Aguma, decried the DSS invasion of judges’ residences.

According to the governor, “the action of the SSS on the 8th of October, 2016 is counter productive. We are of the firm view that their actions in Port Harcourt, Abuja and other parts of the country in which the SSS demystified the judiciary in itself poses a threat to the internal security of the nation.”

Also, the House of Representatives on Wednesday, called  on EFCC to investigate the diversion of the 120 billion aviation intervention fund provided by the Central Bank CBN in 2012;

This is coming just as the House asked the Federal Government to stay action on the proposed concession of airports.

The House gave the marching order after consideration of the Report of the House Committee on Aviation on the investigation of the need to rescue the airline industry from imminent collapse.

The chairman, House Committee on Aviation, Honourable Nkeiruka Onyejeocha, presented the report which was considered at the committee of the whole.

The House also sought invitation of  the Minister of State, Aviation to appear before it and brief the House on his plans and programmes for the aviation sector, including the current status of the ongoing remodeling of international airports, the reasons behind the scope and design of the remodeling.

He is expected to provide detailed drawings and specifications of the current design in order to ensure ascertainment of the actual cost of ongoing remodeling, compared to the loan received.

Ramaphosa’s security team evacuated from Abuja after testing positive for…