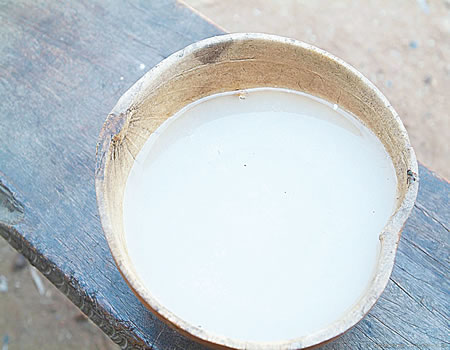 Damages to the testes, the organ that produces sex hormones and sperm, have been recognised as one of the complications of diabetes, and if left untreated will lead to sexual problems, ranging from poor libido to erectile dysfunction, followed by infertility.

Now, in a new study, experts have shown that drinking raffia palm wine can guard against erectile dysfunction or impotence in men with type 2 diabetes.

In the study, the researchers had investigated the effects of raffia palm wine on damages that occur in testes as a result of uncontrolled blood sugar levels.

According to this study, published in the Journal of Food Biochemistry, raffia palm wine was protective from these diabetes induced testicular injuries in type 2 diabetic rats.

The 2019 study involved Ochuko L. Erukainure at the Federal Institute of Industrial Research, Lagos in collaboration with  Rebecca Reddy and Md. Shahidul Islam, both from the University of KwaZulu-Natal, Durban, South Africa.

Raffia palm wine was administered to two diabetic groups at 150 and 300 mg/kg body weight, when untreated diabetic group was used as a negative control, and metformin fed group was served as a positive control. The rats were sacrificed after five weeks of treatment, and their testes were harvested and assessed.

Erectile dysfunction, the inability to get or maintain an erection firm enough for sex, is common in men who have diabetes, especially those with type 2 diabetes. It can stem from damage to nerves and blood vessels caused by poor long-term blood sugar control.

Having type 2  or type 1 diabetes has been linked to male fertility issues such as overall sperm quality and sperm DNA integration, as well as other issues, such as decreased sperm motility and concentration and decreased semen volume.

Raffia palm wine is among the common natural beverages in West Africa and some parts of Asia such as India and Indonesia, which is utilised for both social and medicinal purposes.

In folkloric medicine, raffia palm wine, called “Oguro” in Yoruba language, and “Ngwo” in Igbo is also a component of various herbal remedies for measles, diabetes, boosting breast milk, and as an aphrodisiac.

Raffia palm wine has also been reported to have some nutritional components and mineral elements such as calcium, sodium, magnesium, phosphorus, vitamin C, nicotinic acid, potassium, nitrogen, and thiamine.

Given that raffia palm wine is readily available in all seasons, they suggested that it may be of great benefit in managing diabetes associated with erectile dysfunction and male infertility as it was able to restore sperm count, motility and volume to near normal.

“This study will also improve the medicinal use of this wine, which may also indirectly improve its commercial benefit,” added.

Now, palm wine’s health benefits cannot be overemphasised because it can help to provide the body with the necessary nutrients which prevent deficiencies and improves the hair, skin, fight cancer, improve vision and promotes healthy heart.

Research shows that drinking moderate amount of palm wine has been associated with reducing the risk of developing cardiovascular diseases such as heart failure. This study was conducted by Lingberg and Ezra in 2008.

Palm wine contains potassium which has been proven by research to improve heart health and bring down hypertension. However, too much intake has adverse effects like destroying the liver.

Some eye doctors and optometrists say as yeast is good for the eyes, likewise palm wine helps in enhancing sight, but with a word of caution; Fermented palm wine should not be taken as it contains high quantity of alcohol which is detrimental to organs of the body like liver, kidney and eyes. Palm wine is usually consumed for treating food-borne and diarrhoea diseases due to its high antibacterial properties.

In addition, palm wine contains Iron and vitamin B complex, which are needed for a healthy skin, hair, and nail. Also Iron is very useful for the development, growth, and functioning of some cells in the body. This is why palm wine is helpful in promoting wound healing.

FG warns against violation of Post-UTME, other exam fees reduction

Be yourself at work — It’s healthier and more productive