Quote me, I am the owner of Yorubaland —Olugbo 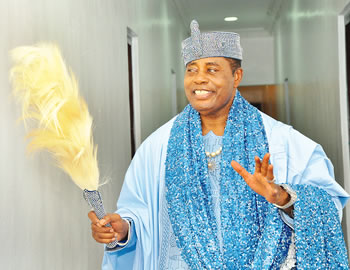 The Olugbo of Ugbo Kingdom, Oba Frederick Obateru Akinruntan, is a Yoruba monarch with a difference. Currently the chairman of the Yoruba Obas Conflict Resolution Committee, his oil enterprise in particular makes him arguably the richest African king. In 2014, Forbes Magazine put Oba Akinruntan’s net worth at $300 million. Aside this, he is a talented musician, gifted with a great voice and not shying away from entertaining his guests with Ilaje dialect music. In this interview with MONICA TAIWO and TUNDE BUSARI, Oba Akinruntan bares it all on the position of Ugboland in Yoruba history. Excerpts:

Kabiyesi, there seems to be a controversy on the history of the aboriginal inhabitants of Ile-Ife. Can you shed light on this?

There is nothing like controversy about it. There is only distortion of the history by the powers that be. But I don’t mind whatever anybody says. The truth remains unchanged. Oduduwa was not part of the Yoruba. He was not part of us. He migrated to Ile-Ife from Mecca. Look at his tribal marks. He had a foreigner’s marks on his cheeks. He had seven children. Out of these seven, one was a female called Owu. Owu is near Ikire. It is called Orile-Owu. It was a place where slaves were assembled for sale. Some of the Owu are in Abeokuta and other parts of Yorubaland. I don’t need to consult any book to narrate this history. I have read about 2, 000 authorities on this subject. This history has always been there but the powers that be always make efforts to suppress it. I am not ready to hurt or fight anybody over this but I know the truth is there and nobody can do anything about it. We are the aboriginal inhabitants of Ile-Ife. It was Obamakin Osangangan, son of Oraife, who founded Ile-Ife. If you are familiar with Ifa divinity, Ugbo is mentioned in a verse where it says ‘Kutukutu oba ugbo’.

Osangangan also had many children. I will mention only two. When Oduduwa arrived, he came to Ileero, (Palace) at Iremo quarters in Ile-Ife and he was accepted because of our hospitality. Being a non-native and coming from a background where might was right, he engaged in struggles. Oduduwa never had a successful reign in Ile-Ife. Although he first defeated Obatala, Obatala later fought back and defeated him.

Why did you leave Ile-Ife?

That is a good question. My progenitors left Ile-Ife following Osanyin’s directive.  Obamakin retreated and settled at Okemafuragan, near Oke-Igbo. Then, they raised 16 hefty men who regularly raided Ile-Ife, capturing women and children. The men covered their faces with masks and were believed to have descended from heaven because Ugbo people are called Ugbo atorunwo ( people awho descended from the heavens ). The people, on sighting them, would always run away from being captured. At a point, Moremi, a beautiful slave woman captured from Ile-Ife, became the wife of Oromakin at Okemafuragan.

How did she become Oromakin’s wife?

Oromakin could not resist her beauty. She stood out among other slaves. She was extremely beautiful. So, Oromakin separated her from others and eventually took her as a wife, oblivious of her real mission. In the end, Moremi succeeded in playing a fast one on him, which helped to demystify the masked men. To the Ilajes, unlike in Ile-Ife where she is still being celebrated, Moremi was a traitor. She betrayed us after she had seen the secret behind the masked men that invaded Ile-Ife. She leaked the secret and ended the raid. Till date, we see her act as an abomination. Ugbo people are forbidden from taking light complexioned ladies as wives. But the seven captured were given special treatment.

They were not hurt. In fact, they begged them to stay because they knew their father could return to destroy Ile-Ife. Obamakin returned to Ile-Ife to see what was happening to his people but he discovered they were given a VIP treatment. He was shocked. The Ifa oracle later instructed him not to destroy but to relocate to the shores of the Atlantic where lies the wealth of the Ugbos and generations to come. Is it not a blessing now that we are the only oil-producing town in Yorubaland? Till date, those of us who stayed back in Ile-Ife are there. They maintain the link with us here. In fact, they attend our functions.

Can you continue with the history?

The late Oba of Benin wrote his autobiography which he titled ‘I Remain, Sir, Your Obedient Servant’. He revealed everything in the book. Oba of Benin said, the Olugbo is the only recognised Yoruba Oba. I am the owner of Yoruba nation. Oba of Benin says Ugbo, very close to Okitipupa, is the owner of the South-West. I know many Obas would be asking ‘why is the Olugbo saying this?’ But I am only saying the truth. We have some similarities with the Benin.

Our ancestors had something in common. Quote me as an authority. There is a book written by Jacob Eugharera where he stated that the Benins captured 201 Yoruba towns and villages.  Why they respected Ugbo was that when they were advancing, we had an Oba that was given respect equivalent to that of the Pope. The Benin had a belief that Ugbo was very strong. If you want to read the history of the Yoruba, go to Portugal because they first had contact with the Yoruba ahead of other Europeans.

Why are you here at a place under construction?

I deliberately brought you here to my ancestral home where my forefathers resided when they arrived here. You can see the space is not up to one plot. It is the space factor that made me to build my palace where it is now. My palace occupies 10 acres and it is the best that can host heads of state and other important personalities from any part of the world. I have been to the houses of so many of them and seen how they built them but my palace stands out. I have about 140 acres here but I occupy only 10 for the palace.

You are often seen with beautiful crowns that reveal you as a stylish king. Just how stylish are you?

I don’t know what you mean by that but I am one who does not compromise my taste. I am exposed in the course of travel round the world. So, I should have a good and acceptable taste. If this reflects in my comportment and appearance as an Oba, it is complimentary. Talking of the crown, did you know that we have the first ancestral crown in Ugboland? The crown is not ordinary. Go and read books and confirm or refute what I am saying here. Our crown is the oldest in Yorubaland. We had it before Oduduwa arrived.

Kabiyesi, you freely interject this interview with music. Music must be your hobby. How true is this? Music is not only my hobby, it is also my passion. If I hear a good music, it takes me no time to hook up with it as you can see me doing with my chiefs here. We are catching fun despite the questions you are throwing at me.

You must be a member of choir group as a pupil?

Yes I was. I even thought I would end up a musician. I love music and Ilajes love music. We have our distinct melody from which we derive a lot of pleasure and fun. Music is good if beautifully rendered as we do here. Also, I love to dance. I dance so well. When I was a student, people came to pick me to occasions to dance. I am so flexible on dance floor.

Have you a favourite musician on the list of the scores we have around?

Sunny Ade is my favourite musician. I love and enjoy his music.

With your busy schedule, do you have time to recreate at all, and which activity suits you most?

One of the reasons I was late before I came out for the interview is the question you just asked. I enjoy good sleep at my leisure hour. I realise that good sleep, more than anything else, has a way of refreshing body.

Recalling your school days, how do you describe your days as a pupil?

Thank God my teacher is seated here. I was not a gentle boy at school. I loved my independence and struggled for it. This is the spirit that drove me to start my business from the scratch and become whom I am today with interests at home and abroad.

How do you manage your business now that you are here and practically inactive in the corporate world?

What is important in life is to have a strong succession plan. I am such an organised person right from when I was hustling. I introduced my children to my business from the beginning. I would take them to my filling stations and get them familiar with how work is done.

Today, they are better off. My son is the Managing Director and he is doing well. He knows his onions. He is in charge. I only call when it is time to draw my salary. I ask him to pay my salary and he does. That should be the joy of a parent who appreciates the fact that the future belongs to his children. As I am here, I have nothing to worry about on how my companies are run. Again, I believe so much in human development. I employed and trained competent hands who are all in charge of different departments.

As the chairman of Yoruba Obas Reconciliation Committee, how far have you gone in achieving your set goals?

The assignment is a challenging one but I am happy for what we have achieved so far. One of it is the fact that you hardly see traditional rulers engaging one another on the pages of newspapers as it used to be. It is part of our effort that made them see reason why we should not desecrate the stool. We are still working hard in other areas and we are going to achieve more success.

Secretary of the committee, the Shabiganna of Iganna, Oba Soliu Oyemola, spoke so well of your passion for the assignment. How do you assess his performance as your secretary?

Shabiganna is a committed secretary. He understands what we do and puts all his heart into it. He is experienced and intelligent. Working with him in the committee makes the job easy because he is blessed with a lot of discretion which helps in moving forward.

Nigeria no longer a federation — Shonibare