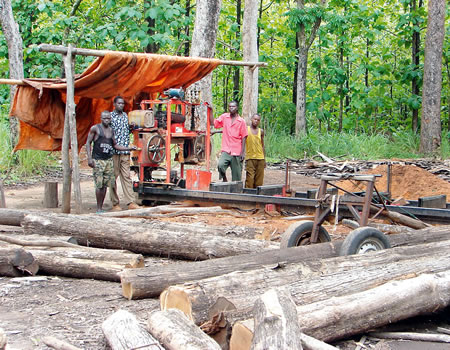 The Ondo State governor, Rotimi Akeredolu, recently kicked off the afforestation project in the state to rank Ondo among the best producers of quality woods in the world. HAKEEM GBADAMOSI examines what the state stands to gain with the project.

When the administration of Rotimi Akeredolu came on board some few months ago, one of the giant steps his government took was the closure of the state’s reserved and free area zones. This drew the ire of the timber operators in the state. But few weeks after stabilising the government, the free zone areas across the state were declared opened while the reserved remained closed.

The forest closures revealed so many atrocities perpetrated. These included illegal tree felling by encroachers within the state and from other neighbouring states. Some others specialised in the cultivation of Indian hemp in the government reserved area to eke a living.

Apart from this, the chairman of the Timber Traders Organisation (TTO) in Akure South confirmed the atrocities perpetrated by these encroachers which he said reduced the internally generated revenue of the state. He also complained of the dearth of timbers in the forest, alleging the insensitivity of previous governments towards the diminishing number of timber trees in the forest despite receiving money from them to grow new trees on every tree felled.

This could be responsible for the flag off of 10,000 hectares afforestation project by the governor at Omotosho in Okitipupa Local Government Area. The project is a partnership between the state government and a Chinese firm, Wewood Limited.

The 10,000 hectares project initiated by the state government has been described as one of the right steps in the right direction and a good move to open the economy of the state as the sector remains one of the areas where government can generate revenue.

Speaking on the reasons behind the initiative, Akeredolu who described the flag-off of the project as a landmark in the annals of the history of the state, stated that the project of such magnitude was last embarked upon in 1979 during the administration of the late Chief Adekunle Ajasin for the purpose of supplying wood pulp to Iwopin Paper Mill and other wood-based industries in the area.

He lamented that nothing had been done or added to the forest reserve area for its sustainability, which was established by the first civilian governor in the state, noting that the forest had been badly encroached upon resulting in the looting of the state’s valuable products due to lack of proper planning, surveillance and accountability. He, however, noted that the project failed to fulfil the purpose for which it was established by Ajasin.

He however assured the people of the state of his administration’s resolve to take appropriate steps to ensure the success of the afforestation project this time around, saying there would be proper monitoring of the project to make the afforestation dream come true.

“The core objectives of the state government’s partnership with Wewood Limited in embarking on the afforestation project are to engender environmental regeneration, achieve a cleaner, healthier and sustainable environment to reduce the rate of unemployment in our state,” he said.

He however reiterated his administration’s commitment to remain focused in attracting investors for the sustainability of the environment and for the benefit of the people, saying it was the responsibility of his government to make a difference in the lives and wellbeing of the people of the state.

Speaking during the inauguration of the project, the Business Development Manager of Wewood Limited, Mr. Sun Peng, noted that the push by the governor to tackle unemployment and ensure protection of the environment has started yielding the desired results.

Peng said no fewer than 30 other Chinese investors had shown interest in investing in different types of manufacturing companies in the state because of the governor’s hand of fellowship. According to Peng, “We promise to pull all our wealth to bear in this afforestation project in such a way that our mutual benefit will not be compromised, and we can assure you that the incoming generation will forever be grateful for this project. This will not only bring more jobs to Ondo State, but will also increase the bilateral relationship that our country and Nigeria have been talking about.”

The initiative of the governor has however received commendations from different quarters, with most stakeholders describing the step as a right direction to create employment and open the state economy. However, many of the stakeholders interviewed, by the Nigerian Tribune, called for proper monitoring of the project to ensure its success.

The chairman of the Timber Trade Organisation in the state, Comrade Ayodeji Omotosho, called for proper monitoring but urged the state government not to abandon the old forest reserves but to re-introduce the process of replacing trees, to guide against deforestation just as he added that  no tree had been replaced in the forest in the last few decades.

“Most of the trees we have in the forest were planted or replaced during the days of Chief Obafemi Awolowo and subsequent governments have failed to follow his footsteps. These trees might be a thing of the past in this part of the country if we fail to plan to plant new trees. We must go back to the days of our great leaders who put in place better plans for us and we must also guard against the extinction of our trees. We salute the courage and vision of Akeredolu in reviving the dreams of our great fathers by introducing afforestation,” he said.

“We want to appeal to the state government to lift the ban on the closure of the reserved areas. Most of our vehicles are in the bush since the area was closed. We are calling on our governor to consider the opening of the reserved area to continue with our business in order to help develop the state’s internally generated revenue,” he said.

An environmentalist in the state, Akinbolusire Okunlola, also described the governor’s initiative as timely and called on other governors to emulate the good steps taken by Akeredolu, saying afforestation is of critical importance to any environment while he noted that many parts of the country has been ravaged by many environmental problems which can be managed through afforestation.

Okunlola stressed the need to conserve forests across the country through scientific research to improve the quality of forest trees. He stated that this becomes more important than ever in the state saying forest areas remain a source of wealth and beauty. He called on governments at all levels to encourage planting of trees and explained that there are so many things that can be gained from such commitment.

“Deforestation exposes the soil to destruction through erosion and in some cases, flooding, while many plant species are lost and the natural home of wild life destroyed. This reduces the number of wild life available,” he noted.

In the same vein, a resident of Omotosho, Rotimi Amao, said the afforestation project could only be a success if government employed capable hands, just as he stated that the afforestation would be a success only if the issue of bush burning was addressed. He called for proper orientation for the people of the area saying bush burning has led to the destruction of forests, wild life and soil fertility in the past.

He contended that the government should introduce protective legislative measures to prevent the incidence of bush burning.

He advocated for the conservation of other forest reserves across the state, saying “conservation of our forests should not be restricted to the confines of government alone. Traditional rulers, nongovernmental organisations, private firms and the public should adopt the culture of preserving our trees; the duty lies on all of us to protect and preserve our forests for future generations.”

However, stakeholders in the state noted that the new project initiated by the Ondo state governor would create over 1,000 direct jobs for the unemployed youths in the state. Apart from this, the state government has been charged to fulfill its promise of creating more employment in the state through agriculture. Many of the stakeholders urged governor Akeredolu to give priority to agriculture, noting that the south west region, especially Ondo State is known to be in the forefront of development in the country following its various agricultural initiatives in the late 1950s.

They described agriculture as the mainstay of the economy through which several enviable and unparalleled achievements were recorded by the government of the old Western Region, scoring many firsts in terms of achievements in the history of the country.

However, the glittering hope gave way to despair when the leaders decided to abandon agriculture for petroleum. Since then, successive administrations have failed in their efforts to place the state back on a path of redemption through agriculture.

Speaking on the effort of Akeredolu’s government in exploring the neglected agriculture sector, the Chief Press Secretary to the governor, Segun Ajiboye explained that the present administration in the state is putting in place tangible structures to breathe life back into the long-neglected agricultural sector and make it more attractive to youths through many innovations.

According to Ajiboye, in demonstrating the governor’s  seriousness towards the development of the sector as a major source of jobs and wealth creation, Akeredolu is showing that his pre-election promise to build a new Ondo State where hunger would be a thing of the past is gradually becoming a reality.

He said most activities embarked upon by Akeredolu since he assumed office in the area of agriculture have demonstrated that the governor’s blueprint is not a mere political statement, but a contract meant to be executed for the social and economic advancement of the people, irrespective of their political beliefs and inclinations.

According to some experts, Akeredolu’s curiosity to shift the state’s attention to agriculture will soon begin to yield the desired results. However, stakeholders noted that with the giant steps taken by the governor to revive forestation and agriculture in the state, there is no doubt that the sunshine state will soon be on the world map.

Meet the family ‘to produce the next Akarigbo of Remo’