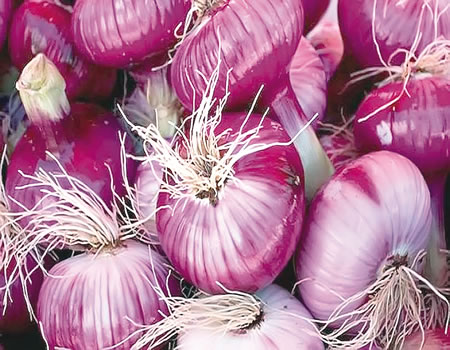 BY now, we know that garlic and onions reduce cholesterol level, and alleviate diabetes and hypertension. However, a new study expanded on that by saying that purple onion works better in alleviating blood pressure than garlic or white onions.

Benefits of onion and garlic have long been studied for their blood pressure-lowering content in people that have hypertension. They contain chemical substances that exert antidiabetes and antihypertensive properties.

Now, researchers found that purple onion had a higher inhibitory effect on angiotensin converting enzyme than white onion and garlic. Angiotensin-Converting Enzyme (ACE) inhibits the conversion of angiotensin I to angiotensin II, which is involved in high blood pressure.

Furthermore, white onion had a significantly stronger inhibitory effect on alpha-amylase than garlic and purple onion. Alpha-amylase are enzyme inhibitors that are widely used in the lowering of high blood sugar.

The present study was designed to assess antihypertensive, antidiabetic, and antioxidant properties of water extract of garlic, purple onion, and white onion, which are the most common and readily available Allium species in Africa.

It was to provide insight into some mechanisms by which garlic, purple onion, and white onion could be used in the management of diabetes and high blood pressure.

The researchers suggested that garlic, white onion, and purple onion exert antidiabetes and antihypertensive properties by an inhibitory effect on ACE, á-amylase, and á-glucosidase coupled with their ability to improve lipid profile.

Onions and garlic are valued herbs endowed with culinary, nutritional, and medicinal value, and they are commonly eaten raw or cooked. Culinary spices such as onions and garlic possess many therapeutic benefits.

Their characteristic strong odour is due largely to sulphur-containing compounds, strongly believed to account for most of the medicinal potential.

The various health properties of garlic and onions have been studied for years. Researchers have looked at how these can help boost absorption of key compounds in common staple foods such as rice and chickpeas.

According to results published in the Journal of Agricultural and Food Chemistry, garlic and onion may boost iron and zinc absorption from cereals seven-fold, so offering opportunities to tackle iron and zinc deficiency, two of the globe’s major concerns.

The bioavailability of both micronutrients is said to be particularly low from plant foods. Fortification of foods with iron poses several challenges, depending on the types of iron used.

In an attempt to enhance the uptake of these minerals from plant sources, the Mysore-based researchers used a model of the gastrointestinal tract to simulate the passage through a human intestine.

Results showed that iron and zinc uptakes from both cooked and raw kinds of cereal were significantly increased in the presence of both garlic and onion, with increases up to 70 per cent recorded.

Improvements in the bioaccessibility of zinc were also observed for both spices, with increases in cereals ranging from 10.4 to 159.4 per cent, and in pulses from 9.8 to 49.8 per cent.

Previously, preliminary data from a study with mice indicate that supplementing the diet with onion and extracts from the vegetable may protect the brain from additional damage linked to stroke.

This study that provides extra motivation for the consumption of onions and published in the peer-reviewed journal Nutrition, suggest that onion extract may be a beneficial nutrient for the prevention of ischemic damage (blood-brain barrier), and that the underlying mechanisms may include, at least in part, its antioxidant effects.

Consumption of a cholesterol-rich diet can lead to the formation of cholesterol gallstones (CGS). But supplementation of this diet with garlic and onion reduced the incidence of the gallstones, according to findings published in the British Journal of Nutrition.

Eighty per cent of gallstones is cholesterol-related. They occur when cholesterol hardens and this then blocks bile ducts. A diet high in cholesterol is reported to be a potential cause of gallstones. Symptoms include pain, nausea, and clay-coloured stools.