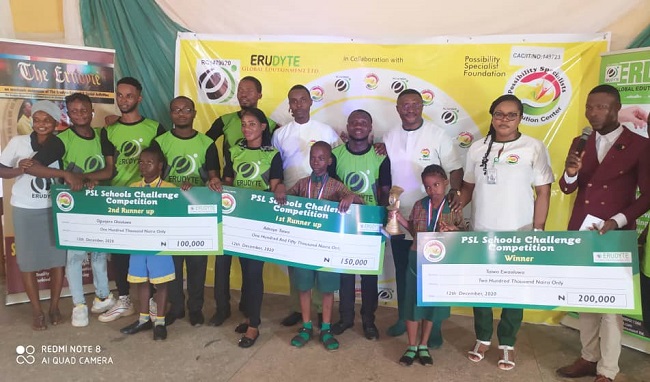 The Possibility Specialists Foundation (PSL), a youth empowerment organisation has lent support to the development of education in Ogun State by giving scholarships to three primary school pupils who emerged victorious from its 2020 School Challenge Quiz and Talent hunt competition.

The cash prizes would, however, not be handed over to the pupils but kept in PSL Empowerment Scheme’s accounts from where for a period of 15 months the pupils will be collecting 20% of their various cash prizes.

At the event, the scholarship beneficiaries were also presented with educational tablets worth N28,000 each while solar-powered lamp were given as consolation prizes to all who participated in the competition. There were also winners in the dancing and singing category from Treasure Land School, Ijebu-Ode.

Mr Epuamowei disclosed further that PSL’s core value remained impacting lives and operating the principle of ‘donate and get empowered’, maintaining that the foundation is skilled to empower Nigerians financially.

He also encouraged the pupils while promising that PSL will take the programme to the national level in order to impact more lives across the country.

Mrs Helen Okon, proprietress of Trinity Kiddies Academy lauded PSL for its interest in supporting the education sector adding that such an organization deserved government’s recognition and support.

In the same vein, President of the Erudyte Global Edutainment and collaborators of the event, Mr ‘Seyi Sowunmi also described the event as one designed for schools in Ijebu-Ode to identify young talents while commending PSL for its thoughtfulness in coming up with the project.

The British Parliament at the Westminster Hall held a debate on ‘e-petition 554150, relating to Nigeria and the sanctions regime’ on Monday. The government of the United Kingdom has however responded…PSL boosts education  PSL boosts education

The surprise visit made on Friday night by the leaders of the ruling All Progressives Congress (APC) to former President Goodluck Jonathan at his residence in Abuja triggered a stir in the major political camps, resulting in at least four possible theories..PSL boosts education