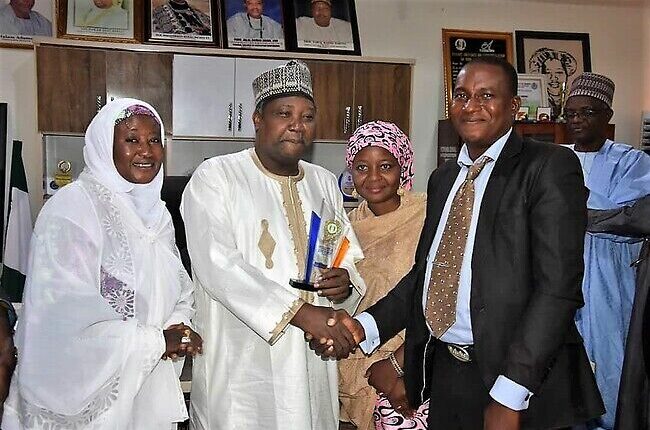 Presenting the award entitled ‘The Grand Commander of Intellectual Discourse (GCID) of FCE Kontagora, 2020-2022’ to the provost in his office was the delegation of the KIDC, led by its chairman, Dr Tokunbo M. Yekini and the secretary, Hajia Hauwa’u T. Yusuf on Thursday, 1 December, 2022.

In his remarks, the chairman of KIDC, who is also the college’s head of Department of French, Dr Yekini lauded, Professor Haruna, the Wakilin Makarantun Zazzau of Suleja, Majidadin Doko’s effort at creating an enabling platform for the intellectual community of the college to thrive and prosper, through the visionary publication of the maiden edition of the COEASU Journal of Intellectual Discourse (CJID)-Covid-19 special edition.

According to him, Professor Haruna, who is also the president of the Committee of Provosts in Nigeria, also helped in the distribution of the journal to various colleges of education in the country.

Dr added that the awardee also donated a computer to KIDC, and encouraged innovative academic exercises such as online presentations of papers for staff promotions, while participating in the committee’s on-line paper presentations and critiques himself.

He said his administrative style had removed various bottlenecks assailing access to sponsorship for further studies and for attending conferences and workshops within and without the college.

While responding he said his motivating factor as a leader is to always have an objective and be determined to accomplish it.

He stated that the KIDC has impacted the lives of various staff of the college in the aspect of developing confidence for online paper presentations and meeting promotion requirements, especially during COVID’19 pandemic period.

He noted that the recognition and honour bestowed on him would spur other staff of the institution that are sleeping to wake up from their slumber and do more as it’s required of them.

“I am extremely happy and heavily motivated today because there is nothing greater than being recognised by the people you serve,” he said.

He thanked the KIDC on behalf of other award recipients for finding them worthy to receive such prestigious awards, pledging his continual support for the committee.

At the event, other top officials of the management team of the institution were equally awarded for their outstanding performance as the Commanders of Intellectual Discourse (CID) of FCE Kontagora,2020-2022.

7 ways to protect gadgets from cyberattacks